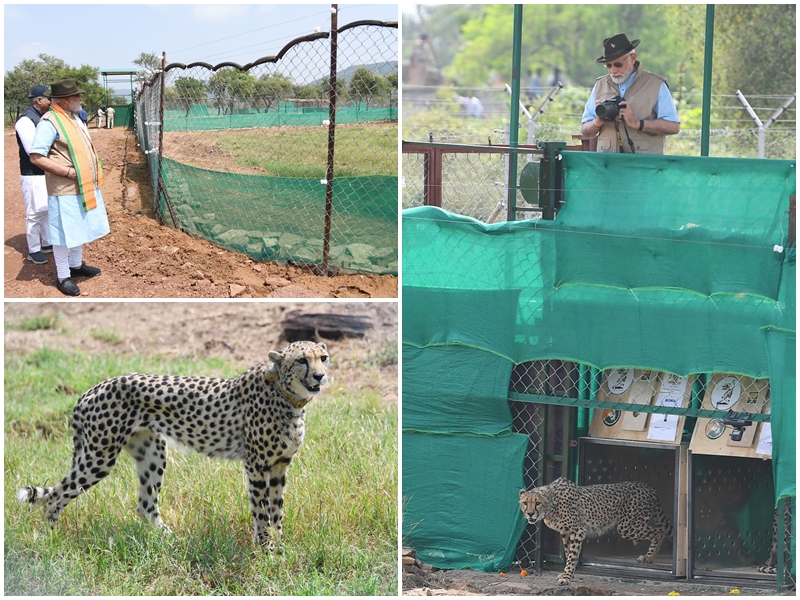 On PM Modi’s birthday, Cheetahs reintroduced in India after 70 years

On the occasion of his birthday, Prime Minister Narendra Modi released eight cheetahs from Namibia to India in the Kuno National Park. During the occasion, PM Modi himself took pictures of these cheetahs. After releasing the cheetahs, he address and said that, when the cycle of time gives us a chance to rectify the past and build a new future. Luckily we have a similar moment in front of us today. Today we have got a chance to connect the link of biodiversity which was broken decades ago. Today the cheetah has returned to the soil of India.

PM Modi said that when we are away from our roots, we lose a lot. Therefore, in this nectar of independence, we have reiterated the importance of Panchpranas like pride in our heritage and freedom from the mentality of slavery.

No meaningful effort was made to rehabilitate cheetahs – PM

The PM further said that, we have also seen a time in the last century when the exploitation of nature was considered a symbol of power. In 1947, when only the last three cheetahs were left in the country, they were also hunted. It was unfortunate that we declared cheetahs extinct in 1952, but no meaningful effort was made to rehabilitate them. Today, in the nectar of independence, the country has started rehabilitating cheetahs with new energy. Amrit has that power which can revive even the dead.

PM Modi further said that, this is a work that no one gives importance to. We put full force behind it, full planning was done, scientists did research and experts from there also came to India. Surveys were conducted across the country for the most suitable area for cheetahs, after which the Kuno National Park was selected. Today our hard work is in front of us as a result.

It is unfortunate that we declared #Cheetahs extinct from the country in 1952, but for decades no meaningful effort was made to rehabilitate them. Today, as we celebrate Azadi ka Amrit Mahotsav, the country has started rehabilitating Cheetahs with a new energy: PM Narendra Modi pic.twitter.com/DEIijJH0Oq

According to the report of news agency ANI, PM Modi released two cheetahs from the first cage, followed by another cheetah from the second cage.

Cheetahs were declared endangered in India in the year 1952. But under ‘Project Cheetah’, eight cheetahs from the African country of Namibia have been brought to India. There are five female and three male cheetahs.

‘Project Cheetah’ is part of the government’s efforts to diversify the country’s wildlife.

To monitor these cheetahs, radio collars have been installed in them. A monitoring team will keep an eye on these for 24 hours.