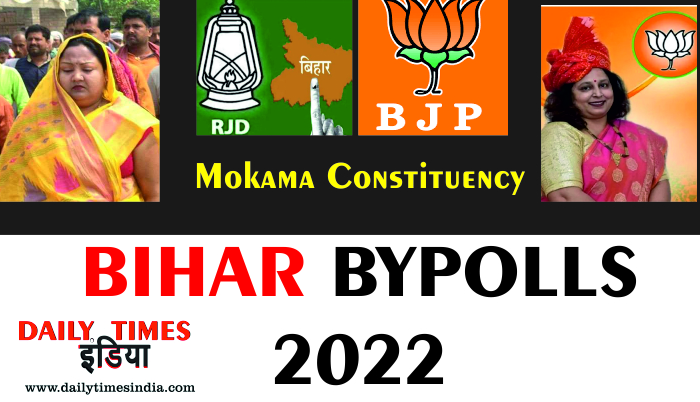 The first electoral test for the ‘Mahagathbandhan’ government, formed less than three months ago.

Patna/Mokama /Gopalganj. Bihar By-poll: Bye-elections for two seats of Bihar assembly are going to be held on Thursday. BJP is leaving no stone unturned to win the seat for the first time, while the ruling Mahagathbandhan’s largest constituent RJD is going all-out to retain it.

Earlier, on Sunday the BJP announced names of both its candidates for the by-elections. The voting process in Mokama and Gopalganj will start tomorrow i.e. on November 3. The BJP has nominee Kusum Devi from Gopalganj and Sonam Devi from Mokama. Kusum Devi who wife of late MLA Subash Singh in Gopalganj. While Sonam Devi is the wife of Nalini Ranjan Singh aka Lalan Singh.

However, both Bahubalies wife is face to face in Mokama assembly. The RJD has nominee Anant Singh’s wife Neelam Devi from the Grand Alliance, while the BJP has nominee Lalan Singh’s wife Sonam Devi against Anant Singh. LJP leader Suraj Bhan Singh himself has led Sonam Devi’s election campaign.

Lalan Singh has an old relationship with Surajbhan Singh

How many voters are there in Mokama assembly including Bhumihar

There are a little more than 2 lakh 70 thousand voters in the Mokama assembly. Male voters are close to 1,42,425 and female voters are close to 1,28,327. Bahubali Anant Singh’s coin runs from Mokama. Singh has been winning elections here for the last 18 years. They are also known here as small government. Sometimes he won with JDU and sometimes with RJD. Not only this, he also won from here by becoming an independent candidate. Whereas BJP has fielded its candidate this time after 1995.

Sonam Devi, who entered the electoral fray from the BJP, has tried her strength against Anant Singh in the past as well. They could not get victory. But this time he will definitely have hope on a BJP ticket. Bhumihar candidates from both the sides have entered the fray. Actually, Mokama is dominated by Bhumihar voters.