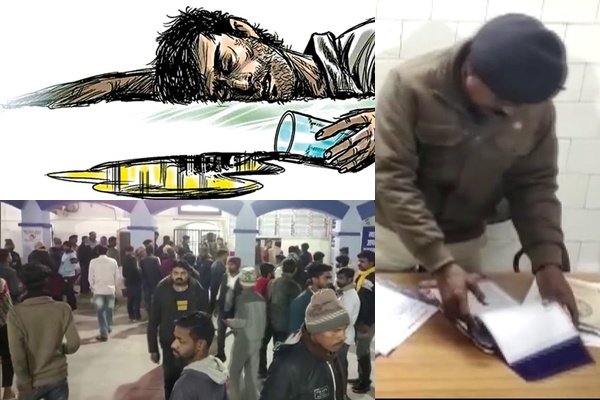 SIWAN: At least three people have died after allegedly consuming spurious liquor in Bihar’s Siwan district on Sunday, while about ten people are undergoing treatment. Four of these people have lost their eyesight according to the news report.

In this case, three people have died and four people have lost their sight. All the sick people are being treated at Siwan’s Sadar Hospital. According to Vivek, now the media is not being allowed to talk to the families of the victims, although earlier some of the victims have admitted that they had consumed alcohol on Sunday evening.

Bihar | A total of 3 people have died after allegedly drinking spurious liquor in Siwan's Lakari Nabiganj. Seven people are undergoing treatment. The cause of death will be known only after an autopsy. 10 people have also been arrested in this regard: Siwan DM Amit Kumar Pandey https://t.co/v56ffq1itF pic.twitter.com/8FCU6E3XNO

Earlier on Sunday, “One person was brought dead and five others are currently being treated at Siwan Hospital. The cause of the death is yet to be ascertained which will be cleared after the reports of post-mortem,” said Sub-Divisional Public Grievance Officer, Abhishek Chandan.

As per the information, the deceased– Janak Bean alias Janak Prasad and Naresh Bean of the Bala village in Siwan’s Nabiganj, complained of stomach pain in the night and their vision was also impacted, following which their relatives then took them to the Siwan Sadar Hospital where the doctors declared them ‘brought dead’.

According to the local media, some people have also been arrested in this case.

Two months ago in December, in Bihar’s Saran district, about forty people died after drinking spurious liquor, after the Saran incident, the administration had claimed to increase strictness and raids on illegal liquor business.