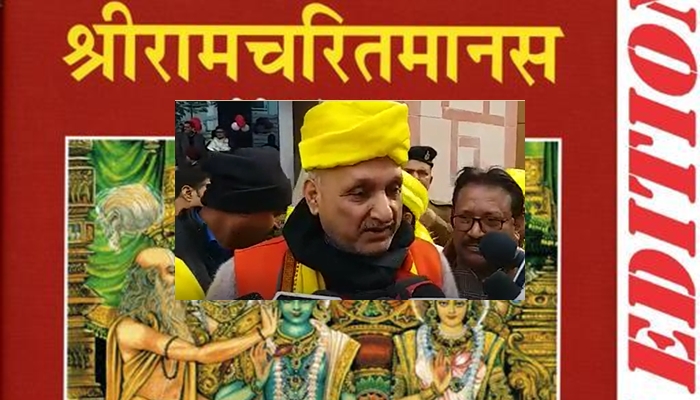 PATNA: Bihar’s Education Minister Professor Chandrashekhar has come into controversies regarding one of his statements.

He said that Ramcharitmanas, a Hindu religious book, spreads hatred in society. Books like Ramcharitmanas, Manusmriti and MS Golwalkar’s Bunch of Thoughts created a social divide, the minister said.

The Education Minister said, “Manusmriti was burnt because many abuses have been given in it against a large section. Why was there resistance to Ramcharitmanas? In this, it has been said that people of low caste should not be given the right to get education.

“A nation becomes great with love and affection. Books like Ramcharitmanas, Manusmriti and Bunch of Thoughts sowed the seeds of hatred and social divide. This is the reason why people burnt Manusmriti and took exception to a portion of Ramcharitmanas, which talks against education for Dalits, backwards and women,” he said.

By quoting this thing, Babasaheb Ambedkar told the people of the world. These are the texts which sow hatred – Manusmriti in one era, Ramcharitmanas in another and Bunch of Thoughts by Guru Golwalkar in the third era. They divide our country and society in hatred. Hatred will not make the country great, but love will.”

Objection has been expressed on the statement made by the Education Minister regarding Ramcharitmanas. Reacting to the statement, Jagadguru Paramhans Acharya, the saint of Ayodhya, has demanded the removal of the education minister from his post.

Jagadguru Paramhans Acharya said, “The education minister of Bihar called Ramcharitmanas a book of hatred, which hurt the whole country. This is an insult to all Sanatanis and I demand legal action against it. He should be removed from his post in a week and he should apologise. If this does not happen, then I announce a reward of Rs 10 crore to the person who bites the tongue of the education minister of Bihar.

Education Minister Chandrashekhar had arrived at Nalanda Open University on Wednesday to address the 15th convocation ceremony. In his address, he described Ramcharitmanas and Manusmriti as books that divide the society.

This is not Sanyog but Votebank ka Udyog

Will action be taken?

The Bharatiya Janata Party (BJP) responded to the minister’s controversial remark and national spokesperson of the party, Shehzad Poonawalla, said, “This is not Sanyog but Votebank ka Udyog.” (sic)