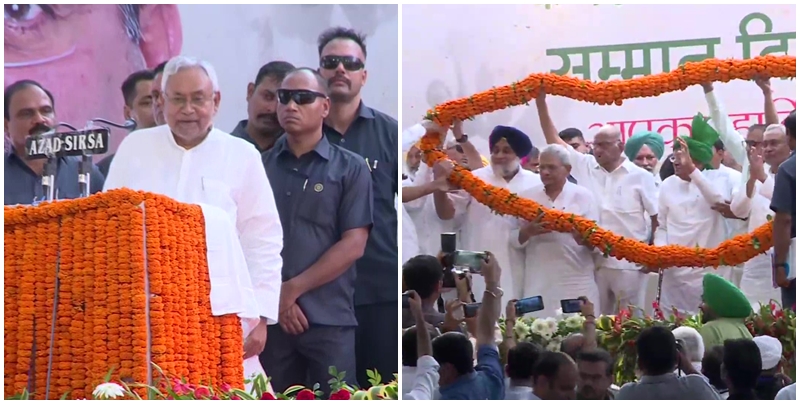 BJP is trying to create disturbances in the country: CM Nitish Kumar

PATNA: Bihar Chief Minister Nitish Kumar on Sunday said “Bhartiya Janata Party (BJP) trying to create a rift between Hindus and Muslim. There is no fight other religious in the country.

During the rally in Indian National Lok Dal in Fatehabad, Haryana, Bihar CM appealed to all opposition parties, including the Congress and the Left, to unite to take on the BJP.

According to the news agency, Nitish Kumar said in the rally that ‘this main front of the opposition’ will have to decide together that the BJP is defeated in 2024.

He said that if all the parties of the opposition fight unitedly, then we will get rid of those who ruined the country.

Fatehabad, Haryana | During last polls, they (BJP) were trying to defeat our candidates. The things that were promised by the Centre for the backward state didn't happen. Today 7 parties are working together in Bihar. They have no chance to win 2024 polls: Bihar CM Nitish Kumar pic.twitter.com/3iZ2kiHdP8

Nitish Kumar also said that there is no quarrel between Hindus and Muslims while BJP is trying to create disturbances in the country.

According to him, my only wish is that we all need to unite at the national level. We need to add more parties with us.

BJP try to defeat our party in the election

Nitish Kumar spoke openly from the stage about his break-up with BJP, said, ‘there was an alliance with BJP but it was working to defeat our party. Nitish said that he did not want to become the Chief Minister, but the BJP forced to become CM.

Bihar CM targeting BJP and said, “They did not allow work and development in Bihar. That for this reason he was decided to leave the BJP”. He said that when he had come to meet Chautala, he had advised him to separate from the BJP.

He also took a jibe at the media and said that the media talks about only one side. Calling everyone to unite the opposition. He also accused BJP of ruining the country.