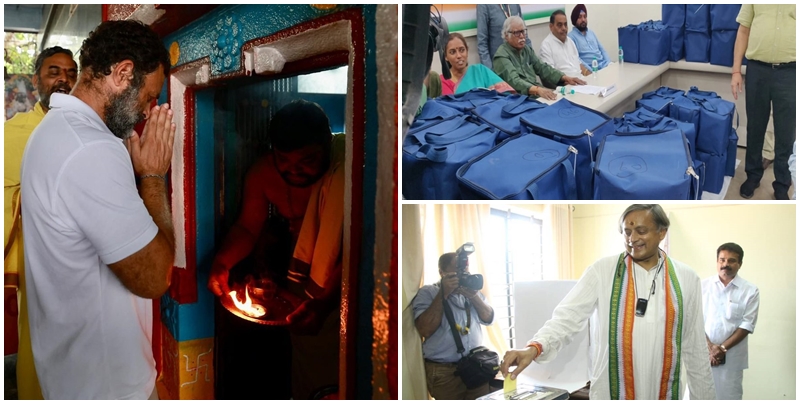 NEW DELHI: The Congress is set to get its first non-Gandhi president in over two decades on Wednesday, with party leaders Mallikarjun Kharge and Shashi Tharoor vying for the top post. Over 9,500 votes cast across the country earlier this week  are presently being counted at the AICC headquarters in New Delhi.

Even before the results of the election for the Congress President post were declared on October 17, Shashi Tharoor’s team has alleged irregularities in the election.

At present the counting of votes is underway. There is a contest between Mallikarjun Kharge and Shashi Tharoor for the post of Congress President.

For the sixth time in the history of the Congress party, the election for the post of the party’s president was held on Monday. The leadership of the party has been in the hands of the Gandhi family for most of the time, or the president has been elected unanimously.

According to the news report, Shashi Tharoor’s election agent Salman Soz said that Madhusudan Mistry’s office has been contacted in this regard. Mistry is the election chief of the Congress organization.

What happened in Uttar Pradesh “is at a completely different level”, said the letter.

“We would like to underline that we have no evidence that Mallikarjun Kharge ji was aware of how his supporters were engaging in electoral malpractice in Uttar Pradesh. We are certain that if he were aware, he would never allow what happened in Uttar Pradesh. He would not allow the tainting of an election that is so important for the Indian National Congress,” team Tharoor wrote.

In a letter to Madhusudan Mistry, Tharoor’s election agent has alleged that there was serious rigging in the elections in Uttar Pradesh. In the letter, there has also been a demand to declare the votes of Uttar Pradesh as invalid.

For the post of Congress President, about 10 thousand delegates from different states had to vote. Uttar Pradesh is included in the states where there are maximum number of delegates.

Amidst the process of counting of votes, Shashi Tharoor tweeted and said, “Thank you” to all those who made this a historic event.

Mallikarjun Kharge’s counting agent Gaurav Gogoi said that this is a historic moment. We are proud that elections have been conducted in such a democratic manner. We also feel grateful to Sonia Gandhi who took charge of the party in difficult times.

Meanwhile, the Bharat Jodo Yatra, helmed by Congress leader Rahul Gandhi, is continuing in Andhra Pradesh. Gandhi visited the Sri Ganga Bhavani temple in Adoni this morning. He is set to address a press conference later in the day.

In the election held on Monday for the post of Congress President, 96% of the votes were claimed. Around 9500 delegates had cast their vote for the election.