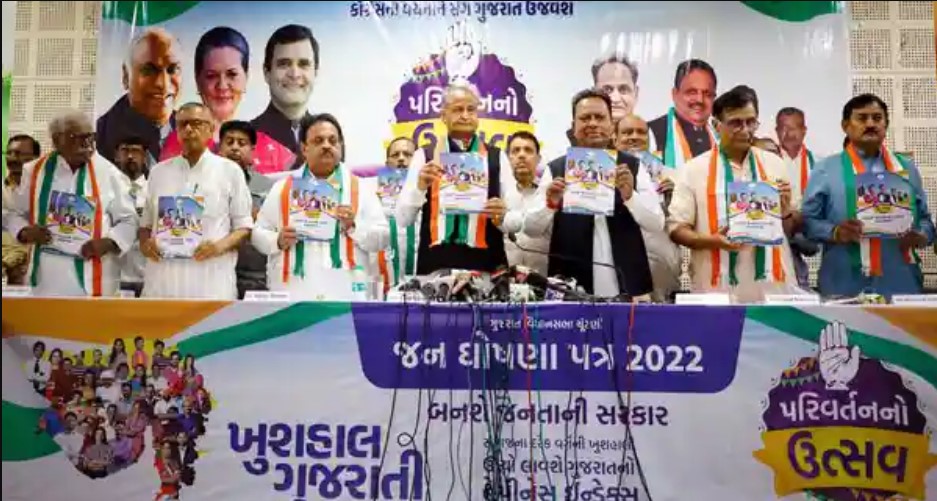 During the releasing the manifesto, Congress Promised to rename the Narendra Modi Stadium in Ahmedabad to Sardar Patel Stadium, if it comes to power in Gujarat.

Releasing the party’s manifesto, senior Congress leader and Rajasthan Chief Minister Ashok Gehlot said Congress will adopt the election manifesto as the official document in the first Cabinet meeting itself, if the party forms the government.

While promising 11 commitments which include waiving the farmers’ loan up to Rs 3 lakh, create 10 lakh jobs in the state for all Gujaratis, and implementing the old Pension Scheme in the state.

According to the Congress manifesto statement, it will ensure 50 per cent reservation for women in government jobs and provide a monthly grant of Rs 2,000 to each single woman, widow and elderly woman in the state.

The party also said that 3,000 English-medium schools will be opened by the government and girls in the state will be provided with free education until their post-graduation.

About 300 units of free electricity, monthly grant of Rs 3,000 to each unemployed youth and domestic gas cylinders for Rs 500 are some of the other sops promised in the Congress manifesto.

Gehlot said if Congress is voted to power, investigations will ordered into all complaints of corruption over the last 27 years and the guilty will be booked.

This manifesto will become the government’s document in the first cabinet if our government is formed, added Gehlot.

Assembly elections will be held in Gujarat in two phases, on December 1 and 5. The counting of votes will take place on December 8, which coincides with Himachal Pradesh’s result date.

However, BJP is in power in the state for the last 27 years and is considered as BJP bastion.