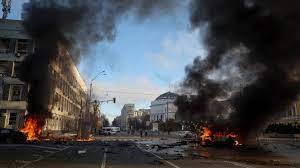 Kyiv: Ukrainian officials have said that Russia has attacked Kyiv with dozens of missiles on New Year’s Eve. At least one person has died while several others have been injured in the attack. About 10 blasts were heard in several regions in Ukraine, according to news agency AFP.

This comes soom after Ukrainian officials warned of another large-scale missile attack by Moscow, reported Reuters. As air raid sirens sounded across the country, Kyiv mayor Vitali Klitschko said one of the blasts occurred in an area of residential buildings in the capital’s Solomyanskyi district, and that there were explosions in two other parts of the city.

The latest attack comes two days after Russia’s major airstrike. The air strike two days ago was described as one of the biggest attacks since the beginning of this war.

The governor of Mykolaiv, Vitaly Kim, confirmed Russia’s missile attacks on Facebook. He has said that the attackers have decided to ruin our New Year celebrations.