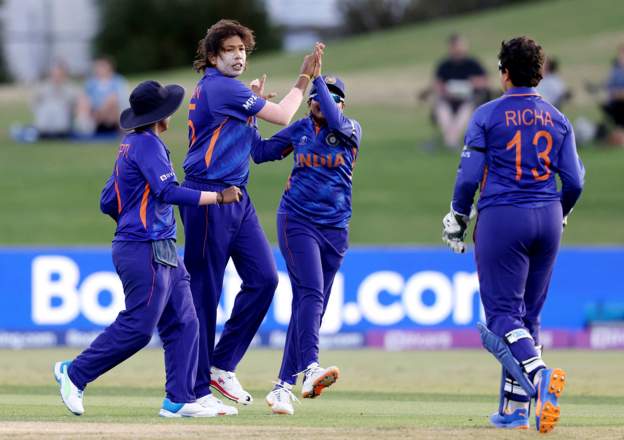 That the feat was achieved at the Mecca of Cricket — Lord’s — made it doubly satisfying.

ENG Vs IND: In the last match of the ongoing 3rd ODI series with England, India women’s cricket team defeated England team by 16 runs. With this, the Indian team won the ODI series 3-0. With this victory, India’s legendary bowler Jhulan Goswami has also retired from cricket.

England won the toss and fielded the first Indian women’s team to bat in this fiercely contested match at Lord’s ground, which is called the Mecca of cricket.

Sent into bat, India were all out for a paltry 169, and at that point it looked like the tourists may have fallen many runs short of making the match a memorable one for their legendary seamer, who is calling it quits after two decades of incredible service to the game.

However, the Indians managed to eke out a win as Charlotte Dean (47) was adjudged run out in controversial fashion, for backing up.

Dean, who nearly pulled off a stunning win for the hosts after they were reeling at 65 for seven and then 103 for eight, was out of her ground and Deepti Sharma simply held the ball to remove the bails, leaving the English flabbergasted.

Indian women’s team was all out for 169 runs in 45.4 overs. For India, 50 from Smriti Mandanna and Deepti Sharma scored an unbeaten 68.

Jhulan took two wickets in the last ODI, the name is the record for most wickets

Jhulan is already the highest wicket-taker female cricketer in ODI cricket. With two wickets in the last ODI, his figure has become 255 wickets. No run came off Jhulan’s bat in this match.

With this, Jhulan Goswami’s career of more than two decades of cricket came to an end.

Jhulan Goswami, who is going to turn 40 in the month of November, has many records in women’s cricket.

Her Test cricket career spanned nearly two decades and this is the most for any Indian female cricketer. At the same time in ODIs, he is at number two in this matter with 20 years and 258 days. At number one is former India captain Mithali Raj, whose ODI career spanned 22 years 274 days.