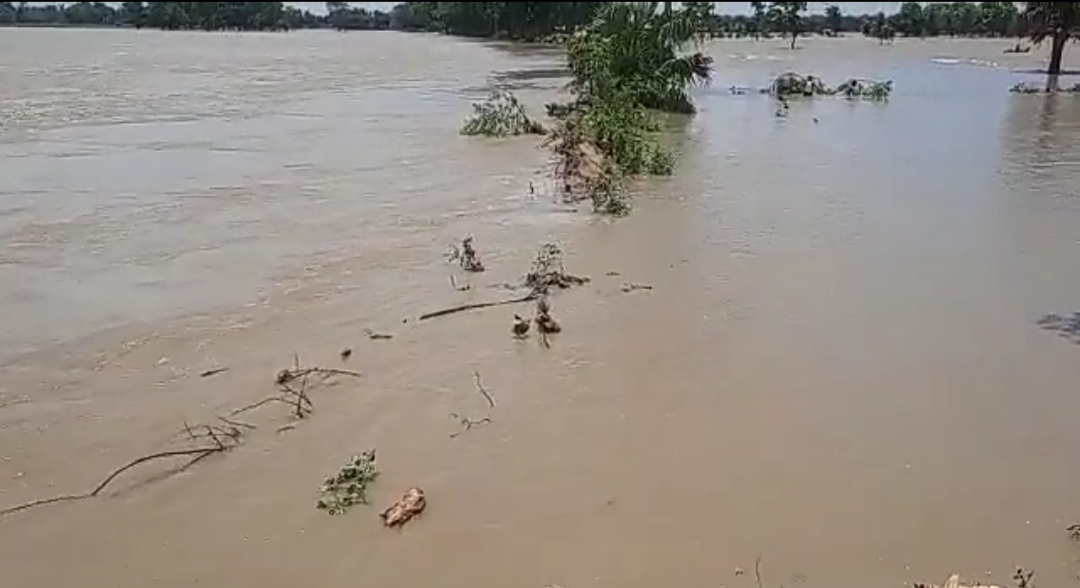 Motihari. Flood havoc is visible in many areas in Bihar’s Motihari district. Due to heavy rainfall, the water level of all the rivers flowing through the district has started rising. The rise of the Gandak River is above the danger mark. Whereas other mountain rivers including Sikrahna, Lalbakeya are still below the danger mark.

After the continuous release of water from Valmikinagar barrage, the water level of Gandak river passing through the district is above the danger mark. Due to which the threat of flood has started looming in many blocks of the district. Severall villages of the same Areraj and Sangrampur blocks have been submerged in water and people are coming and going by risking their lives. Erosion is also being seen in the village due to rising water level.

While many villages of Kesaria block are also grip to floods. Local youth say that we face this problem every year. The formidable form of sugarcane also destroys the crops and greens grown in the field. Due to which the problem of eating and drinking also starts arising for the people.

On Friday, after the release of 4.32 lakh cusecs of water from the Valmikinagar Gandak barrage, the water level in the flood-affected area has started rising further. The district administration is on alert mode, and advisory has also been issued for the people of the villages around the Gandak River.

While many villages including Chatia, Sikatiya, Pandey Tola and Mananpur of Areraj block have been surrounded by water. At the same time, Dubulia of Dumaria is also affected by the increased water level of Gandak.

District Magistrate Shisrat Kapil Ashok has directed the officers of the Irrigation Department to continuously monitor the embankments of Gandak, Sikrhana, Budhi Gandak, Lalbakeya rivers. Instructions have been given to keep all the preparations for flood fighting in places with water pressure. Along with this, villagers around the Gandak River have been asked to take shelter at a higher place. The local administration has been put on alert mode.