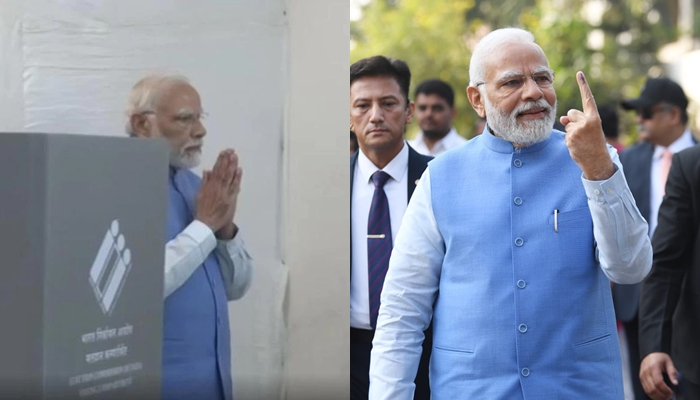 GANDHINAGAR:  Voting has begun across 93 Assembly seats in Gujarat Assembly Election during the second phase of the state. The 93 Assembly segments that are going to polls are spread across Ahmedabad, Vadodara, Gandhinagar and other districts, and the polling will continue till 5 PM.

Prime Minister Narendra Modi cast his vote I the second phase of assembly election in Gujarat’s Ahmedabad on Monday. PM Modi share his picture on twitter after the casts vote.

He exercised his franchise ar Nishan Publice School, Ranip in Ahmedabad. Earlier, he left from Gandhinagar Raj Bhawan to cast his vote.

Cast my vote in Ahmedabad. Urging all those voting today to turnout in record numbers and vote. pic.twitter.com/m0X16uCtjA

He also greeted people on his way to the school ahead of casting his vote. At the polling booth, he stood in the queue waiting for his turn to vote.

In the second phase of elections, 833 candidates are in the fray from 61 political parties, including the Bharatiya Janata Party (BJP), the Aam Aadmi Party (AAP), and Congress. While Prime Minister Narendra Modi’s BJP and the Arvind Kejriwal-led AAP are contesting in all the 93 seats, the Congress is fighting in 90 seats and its alliance partner Nationalist Congress Party (NCP) has fielded candidates in two seats. Among other parties, the Bharatiya Tribal Party (BTP) has fielded 12 candidates, and the Bahujan Samaj Party (BSP) 44.

According to Election Commission, the nominees also include 285 independent candidates. A total of 2.51 crore voters are eligible to exercise their franchise for the second phase of elections, including 1.29 crore men and 1.22 crore women, and the poll body has set up 14,975 polling stations for which 1.13 lakh election staffers have been deployed. There are 5.96 lakh voters in the age group of 18 to 19 years.