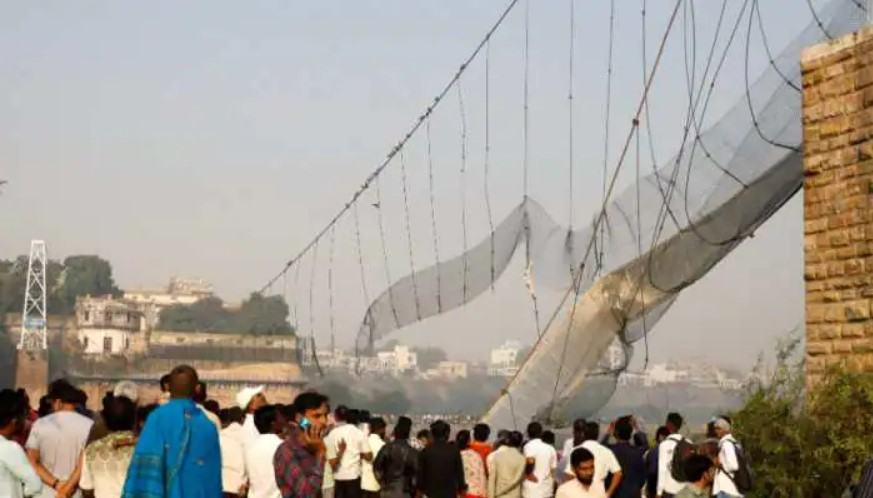 Morbi(Gujarat): So far 132 people have died in the bridge accident in Morbi, Gujarat. And many people are injured whose treatment is going on in Morbi’s hospital.

Gujarat Home Minister Harsh Sanghvi said that Navy, NDRF, Air Force and Army personnel are engaged in the rescue work. The team of about 200 people worked all night. A criminal case has been registered in this matter. Also, investigation has been started under the leadership of IGP Range. He said that so far 132 deaths have been confirmed. Apart from this, the Chief Minister has constituted a high-level committee for the investigation.

Gujarat | Early morning visuals from the accident site in #Morbi where more than 100 people have lost their lives after a cable bridge collapsed.

Giving information in Morbi, the officials said that after the repair, there was a huge crowd of people on this bridge which was reopened for the public four days ago. He told that the incident happened around 6.30 pm when the bridge broke. Giving information, eyewitnesses said that many women and children were present on the “Hanging Bridge” of the British era when it broke down. Due to this people fell into the water below.

Heavy traffic before crashing machhu hanging bridge many of this people try to damage this bridge.

In view of the accident in Morbi, PM Modi has canceled his program. Actually, PM Modi is on a three-day tour of Gujarat and Rajasthan. His road show scheduled for Monday in Ahmedabad has been canceled due to the accident. BJP Gujarat Media Cell said that the page committee Sneh Milan program to be held in the virtual presence of Prime Minister Modi has also been postponed. According to media coordinator Dr. Yagnesh Dave, there will be no program on Monday in view of the Morbi tragedy. However, the program to dedicate the Rs 2,900 crore railway project has not been cancelled.

Union Home Minister Amit Shah also expressed grief over the accident in Gujarat’s Morbi. He said that many people lost their lives in yesterday’s accident in Gujarat. First of all, I express my condolences to the families of the deceased. May God give them the strength to bear this sorrow.

Mohan Kundaria said while talking, “My brother-in-law’s brother has four daughters, three sons-in-law, and five children. Eleven bodies have been found. One is missing.”

So far 141 people have been confirmed dead in this accident. From NDRF to all other organizations are running rescue operations.

The state government has constituted a high level committee to investigate the matter.

Along with this, a case has been registered against the management team of the bridge under sections 304, 308 and 114 of the IPC.