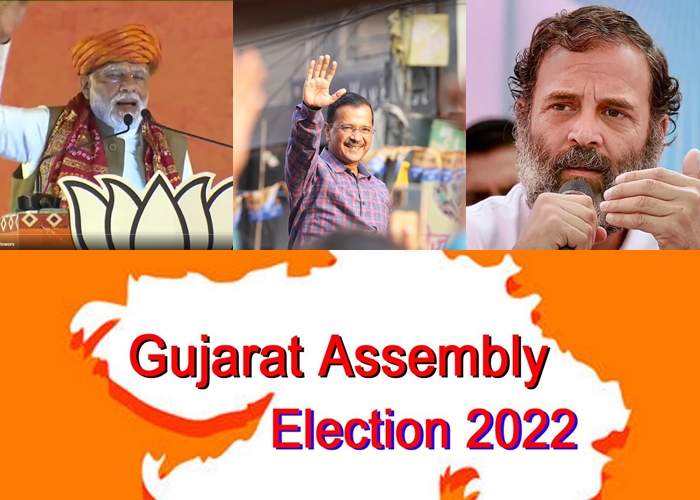 4.92 percent voter turned recorded till 9 am in the first phase

GANDHINAGAR: Polling began at 8 am on Thursday for the first phase of Gujarat assembly elections in 89 seat out of the total 182 seats across 19 districts of Saurashtra-Kutch region and southern parts of the state.

During the polling, Amreli Congress MLA Paresh Dhanani came out of the house carrying a cylinder on a bicycle for voting.

#WATCH | Amreli: Congress MLA Paresh Dhanani leaves his residence, to cast his vote, with a gas cylinder on a bicycle underscoring the issue of high fuel prices.#GujaratAssemblyPolls pic.twitter.com/QxfYf1QgQR

Paresh Dhanani says that he has chosen this method to draw attention to the rising fuel prices. He says that he is sure that the whole of Gujarat will also vote on this issue.

As the voting for the first phase of the Gujarat assembly elections began on Thursday, Prime Minister Narendra Modi called upon people, especially first-time voters to come out in large numbers to exercise their franchise, “Today is the first phase of the Gujarat elections. I call upon all those voting today, particularly first-time voters to exercise their franchise in record numbers,” PM Modi said in a tweet.

Today is the first phase of the Gujarat elections. I call upon all those voting today, particularly first time voters to exercise their franchise in record numbers.

Congress leader Rahul Gandhi’s appeal to voters and twitted, “There is an appeal to all the brothers and sisters of Gujarat, vote

For loan waiver of farmers

For the progressive future of Gujarat, vote in large numbers and make this festival of democracy a success”.

Aam Aadmi Party National convenor and Delhi chief minister Arvind Kejriwal also appeal to the voters and twitted, “Voting is being held on 89 seats in the first phase of Gujarat elections today. My appeal to all the voters of the assembly constituencies where voting is taking place in Gujarat today- “You have a golden opportunity, do vote for the better future of Gujarat and your children, do something big this time.”

While, Union home minister Amit Shah appeal to the voters and said, “In the last two decades, Gujarat has become synonymous with development and peace, which every Indian is proud of. But this was possible because of the strong government elected by the people of Gujarat. I appeal to the voters of the first phase to vote with unprecedented enthusiasm and numbers to continue this development journey.

Bharatiya Janta Party (BJP) candidate from Vansda, Piyush Patel was allegedly attacked by unknown miscreants late on Wednesday, ahead of voting that got under way on Thursday for the first phase of Gujarat elections. Patel alleged that he was travelling from Pratapnagar to Vandervela village with his supporters and was attacked. The miscreants, he alleged, pelted stones and attempted to vandalise his car. Patel sustained injuries on his head and was admitted to the hospital with injuries.

The BSP has fielded 57 candidates, BTP 14 and CPM four candidates. As many as 339 independents are also in the fray in the first phase.

The Bharatiya Janata Party (BJP) and the Congress are contesting in all 89 seats. The Arvind Kejriwal-led AAP is contesting in 88 seats. Its candidate from Surat East constituency had withdrawn his candidature, leaving the party with one less seat to contest in the first phase.

About 4.92 voter turnout recorded till 9 am in the first phase.

However, Voting for the second phase will be held on December 5 and the results will come on December 8.