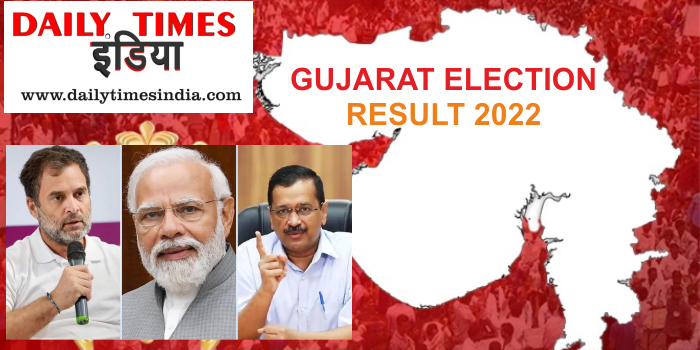 BJP breaks own record to continue for 7th term, while Congress pips AAP to be number 2

GANDHINAGAR: Election trends have come for all 182 seats in Gujarat Assembly and 68 seats in Himachal Pradesh.

BJP has been in power in Gujarat for 27 years and once again it is moving towards record victory.

In the trends so far, the party has got more than 53 percent votes. Congress, which has been out of luck in the Assembly polls, is attempting to gain on the anti-incumbency.

The results of #GujaratElections are quite clear. People have made up their minds to further continue with the journey of development in Gujarat. We humbly accept the mandate of the people. Every worker of BJP is committed to public service: Gujarat CM Bhupendra Patel pic.twitter.com/aujLVwiQpX

Bharatiya Janata Party’s Gujarat unit president CR Patil has said that the swearing-in ceremony of the Chief Minister of Gujarat will take place on December 12.

He said that Prime Minister Narendra Modi and Home Minister Amit Shah will also be present at the swearing-in ceremony of the Chief Minister.

Reacting to the victory, Gujarat Chief Minister Bhupendra Patel said, “The Gujarat election results are clear. People have made it clear that they will continue with the journey of development in Gujarat. We accept the mandate with humility. BJP Each and every worker is committed to serve the public.”

At the same time, the vote share of Congress has come down to 26.9 percent. The Aam Aadmi Party has also secured about 13 percent votes.