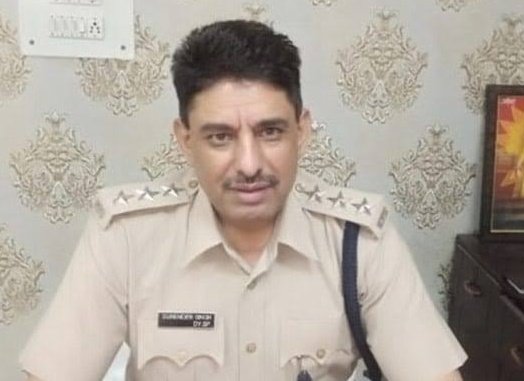 CHANDIGARH: According to news agency NNI, Surendra Singh, DSP of Tawadu in Mewat district of Haryana was crushed to death by a dumper driver on Tuesday.

According to media reports, Surendra Singh was checking the documents of the dumper driver. Surendra Singh along with his team had gone to Pachgaon near Turu to conduct raids against illegal mining on the Aravalli hills.

Surendra Singh had reached there on Tuesday at 11.50 pm with two policemen, a driver and a gunman. After going there, he asked a suspected dumper to stop.

He asked for the paper from that driver but he increased the speed and tried to dump the dumper on the people. Both the driver and the gunman jumped out of the car to save their lives but rammed the car on Surendra Singh.

He was brought to the hospital, where doctors declared him brought dead. According to Haryana Police, Surendra Singh was recruited as ASI in 1994 and was currently posted as DSP in Tawadu. He was about to retire in four months.

Haryana Police tweeted, “DSP Tawadu Surendra Singh laid down his life in the line of duty. Haryana Police expresses its condolences to this brave officer and his family. No stone will be left unturned to bring the criminals to justice.

Congress leader Virendra Singh Rathore has targeted the BJP government of the state on the death of DSP. He tweeted, “BJP misrule in Haryana. In Nuh, Haryana, mining mafia dumped a dumper on Tawadu DSP Surendra Singh, due to which he died tragically on the spot. Was about to retire this year. Who is supporting these mafias?

Haryana Home Minister Anil Vij has said that strict action will be taken in this matter and no one will be spared.