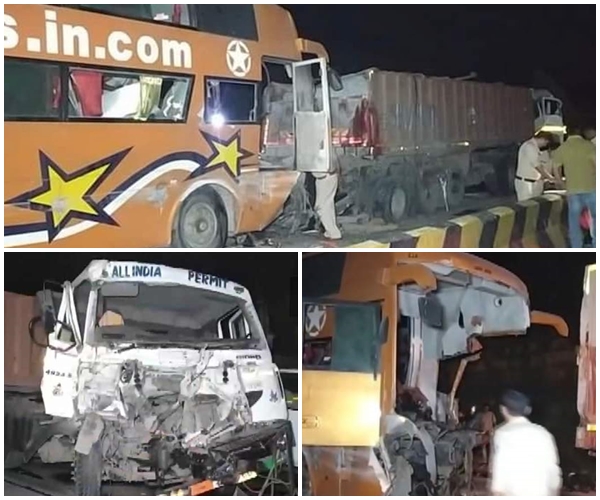 BHOPAL: 15 were killed and more than 40 other injured after a bus collided with a stationary truck in Rewa district of Madhya Pradesh, according to the report on Saturday.

“The bus was on its way to Gorakhpur from Hyderabad when it collided with a stationary trailer-truck on national highway (NH) 30 near Sohagi ghati area,” Rewa collector Manoj Pushp said.

According to news agency, 20 of the injured have been taken to a hospital in Prayagraj district of UP for treatment.

SP Reeva Navneet Bhasin told that the bus was going from Hyderabad to Gorakhpur and all the people in the bus are from Uttar Pradesh.

Rewa Collector Manoj Pushpa said, “The bus was coming from Hyderabad. Bus collided with a truck at Suhagi Valley. It seems that the truck collided with another truck ahead of him due to which he must have applied the brakes and then the bus hit him. The front part of the bus completely entered the truck, causing the death of the people sitting in the cabin and front seats of the bus. A lot of people have been injured.”

It seems that the trolley truck had an accident with the truck in front of it and when the driver applied brakes, the bus behind it rammed into it. Police-admn and local people are here. Rescue operations were done. Injured have been sent to hospital: Manoj Pushp, Rewa Collector pic.twitter.com/6BcEeeYzSb

He told that as soon as the information was received, the local police and administration team reached the spot. Local people also came forward to help. The bus and the truck were separated with the help of a crane. About 40 people were immediately admitted to Sanjay Gandhi Hospital in Rewa.

Madhya Pradesh Home Minister Narottam Mishra has condoled the incident. He wrote in a tweet, “The untimely demise of many people in the painful road accident in Rewa is extremely sad and painful.”

UP Chief Minister Yogi Adityanath condoled the incident and announced a compensation of Rs 2 lakh each to the kin of those who died in the accident.

CM Yogi tweeted, “The loss of life in a road accident in Rewa, Madhya Pradesh is extremely sad. Praying to Lord Shri Ram to place the departed souls at his feet and provide speedy recovery to the injured. My condolences to the bereaved families. are with.”

In another tweet, he said, “Talks have been held with Chief Minister Shri Shivraj Singh Chouhan ji for proper treatment of the injured and for transporting the mortal remains of the deceased resident of Uttar Pradesh to the state. Rs. 02 lakh to the kin of the deceased resident of the state and Rs. Instructions have been given to provide assistance amount of 50-50 thousand rupees.

Madhya Pradesh government will bear the cost of treatment

He told that the injured have been sent to Prayagraj by bus after first aid. The seriously injured are being treated at Rewa Medical College.