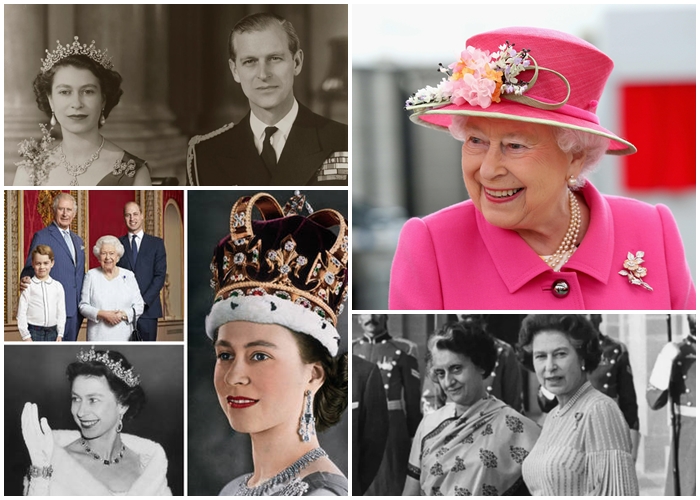 On 50th anniversary of India & Pakistan, last time Queen went out in public and visited India was in 1947;

Even though the Queen Elizabeth II was not the Queen of India, but the enthusiasm of the Indians who gathered in large numbers proved that she still rules the hearts of millions of Indians.

UNITED KINGDOM (UK)/INDIA: On the way from Delhi’s airport to the Rashtrapati Bhavan of India, about one million people gathered to see Queen Elizabeth II. When the Queen visited India for the first time in January 1961.

To catch a glimpse of the royal couple, “people were flocking to the capital in trains, buses and bullock carts.

The New York Times reported in its report, “In that week the Indians, forgetting all their difficulties, economic troubles, political upheavals, Communist China, Congo and Laos, flocked to see the Queen.

At that time Queen Elizabeth II was in the capital of India and the Indian was ready to take advantage of this opportunity. While it was being said, “People were trying to see the Queen and the Duke of Edinburgh Prince Philip. They had forgotten all their troubles.”

The Queen was the first British ruler to sit on the throne after India’s independence from British rule in 1947.

The Queen’s visit gave the Indians an opportunity to show the British rulers that “the British are not in a bad shape even after they left India.”

In the video footage of British Pathé, it can be seen how the royal couple was welcomed with open arms by the people. The royal couple were on a six-week tour of the subcontinent at the time, as well as trying to understand India more.

The Queen visited well-known places in Mumbai, Chennai and Kolkata (formerly Bombay, Madras and Calcutta). The places he visited included the Taj Mahal in Agra, the Pink Palace in Jaipur and the old city of Varanasi.

Special receptions were organized for her at many places. He spent two days in a Maharaja’s hunting ground and also took an elephant ride. The royal couple attended the Republic Day celebrations on 26 January as guest of honour.

Queen Elizabeth II addressed a large gathering at Ramlila Maidan in Delhi. She went up to the Taj Mahal in an open-roofed car, waving her hands on the way to greet the common people.

In West Bengal, she visited a steel plant built with British help and met employees there.

In Kolkata, she visited the memorial built in memory of Queen Victoria. A special program of horse races was organized for the British royal couple at a local racecourse, the winner of which was honored with a cup by the Queen herself.

A reporter from All India Radio had said that the Queen may not be the Queen of India, but the enthusiasm of the Indians who thronged in large numbers proves that she still rules the hearts of millions of Indians.

Queen Elizabeth II visited India for the last time in October 1997. This year marked 50 years since the partition of India and Pakistan, and the Queen made her first public outing since the funeral of Princess Diana.

During this, there was a dispute about many things. The Queen’s visit included the Jallianwala Bagh Memorial Park, the site of the bloodiest massacre in the history of British rule in India, for which many people were demanding an apology from her. In 1919, British soldiers opened fire on people who had come to attend a public meeting at this place. Hundreds of people died here.

A night before visiting the country’s settled city of Amritsar, the Queen addressed a gathering in Delhi and said, “It is no secret that incidents like Jallianwala Bagh have happened in history, where I am going to go tomorrow, It was a disturbing example. No matter how much we wish, but history cannot be rewritten. History has sad moments and happy moments. We need to learn from sorrows and create happy moments.”

Just before boarding a flight at Aberdeen on Friday, the morning after the death of his grandmother Queen Elizabeth, Prince Harry put his arm around the shoulder of an airport worker who had expressed her sympathy while accompanying him across the tarmac.

It was a moment of warmth and informality characteristic of Harry, whose approachable persona long made him one of the most popular royals – until his decision to step back from royal duties caused a breach in the family that is far from resolved.

Harry was the last to arrive at Balmoral Castle on Thursday, as the queen’s closest relatives rushed to be with her in her final hours, and the first to depart on Friday, reflecting the fact that he is no longer part of the family’s inner circle.

Mourners gather outside St Paul’s Cathedral ahead of service

Mourners are beginning to gather outside London’s St Paul’s Cathedral ahead of the service prayer to remember Queen Elizabeth. According to a report by The Guardian, members of the royal family are not expected to attend tonight’s service but prime minister Liz Truss will be present.

She made sacrifice to perform her duties, King Charles remembers Queen Elizabeth

King Charles III in his first address to Britain said that Queen Elizabeth made a lot of sacrifices to perform her duty. He said her dedication never changed through time. He also said the nation flourished under her regime through all the challenges.