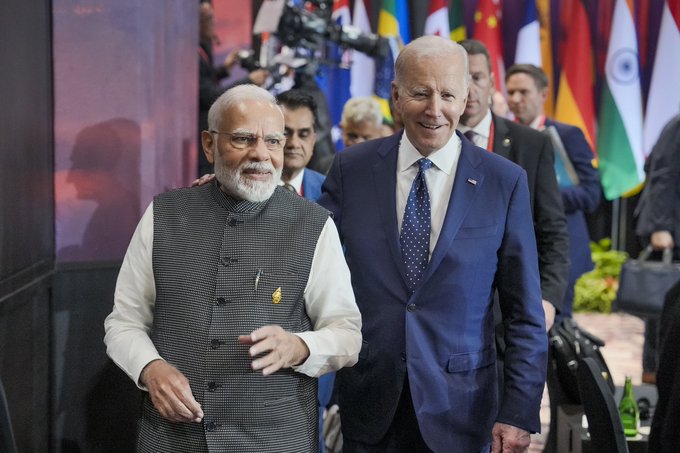 Describing India as a “strong partner”, US President Joe Biden has said that he will cooperate with his friend Prime Minister Narendra Modi during the G-20 presidency.

Biden on Friday said he would back “my friend Prime Minister Modi” during India’s G20 presidency to advance sustainable and inclusive growth, even as the top American diplomat in India contended the G20 is not a “magic forum” for finding a solution to the Ukraine war.

President Biden tweeted his picture with PM Modi and wrote, “India is a strong partner of the US and I look forward to supporting my friend Narendra Modi during India’s presidency of the G-20.”

India is a strong partner of the United States, and I look forward to supporting my friend Prime Minister Modi during India’s G20 presidency.

Together we will advance sustainable and inclusive growth while tackling shared challenges like the climate, energy, and food crises. https://t.co/EsTK9XdsCp pic.twitter.com/dTpBdiTJM0

Biden wrote, “Together we will advance sustainable and inclusive development by tackling challenges such as climate, energy and food crises.”

The Ukraine crisis is being seen as one of the key challenges for India’s G20 presidency, which began on December 1, especially after the crisis almost held up a joint communique at the Bali summit. Diplomatic maneuvering by India and Indonesia helped finalize a joint statement at the last minute though the document stated that the G20 members remained divided in their approach to the conflict. India’s approach – that today’s era is not of war – found mention in the communique.

Jones said the G20 returned to its core – economic issues – in the Bali summit after intensive discussions on Russia. “There was clear willingness on the part of all participants to get back to the core elements of the G20 and…we understand from our Indian colleagues that India intends during its G20 presidency to really dive into the many issues that are involved in international economics, business [and] all the things that affect people’s lives,” she said.