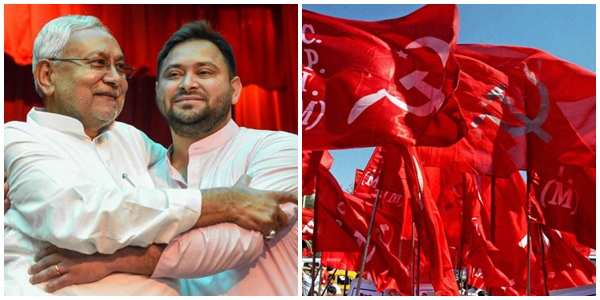 However, CPI-ML had indicated that it would support the government from outside. There are 16 members in the Bihar Legislative Assembly including CPI, CPI(M) and ML. The CPI-ML has called a meeting of the state committee on August 13, which decision will be taken whether to join the government or not.

Legislators from the Marxist Communist Party (CPM), Communist Party of India (CPI) and CPI (ML) may also be included in the Council of Ministers. The three Left parties have 16 seats. In such a situation, a maximum of four ministerial posts can favour his side. while it will be important that how many seats can be agreed with their constituents.

The three left parties are now making up their mind to join the government of the Grand Alliance as well.

According to the CPI and CPM sources, discussion have started with the constituents of the Grand Alliance of Left parties. If this happens, then this will be the first time that the Left party will also become ministers in the government. Male MLA Mehboob Alam says that there is a consensus in the party to join the government this time. Male has 12 MLAs, in such a situation, it is necessary for them to join the government to take up the problems of the people strongly.

According to a Left party insider, the RJD has given “the CPI and the CPI (M) fewer seats as compared to their influence on the ground”.

Revival of issues raised by the Left

The role of the Left in the present elections is significant in a situation of close contests between the constituents of the grand alliance and the National Democratic Alliance (NDA). It also poses a distinct possibility of the revival of the Left and the issues it represents. For instance, one central issue that has struck a chord among the youths of Bihar is unemployment, which Tejashwi Yadav of the RJD has been raising at every public meeting.

The RJD manifesto, “Pran Hamara” (Our Promise), raises mostly economic issues. Thus the Left’s long-standing demands on these issues are being taken to the people through the election campaign. That was one reason, political observers feel, for a large number of people flocking to the RJD election rallies. The RJD, which has been drawing political sustenance mainly from Yadavs, appears to have expanded its reach among all sections of people.