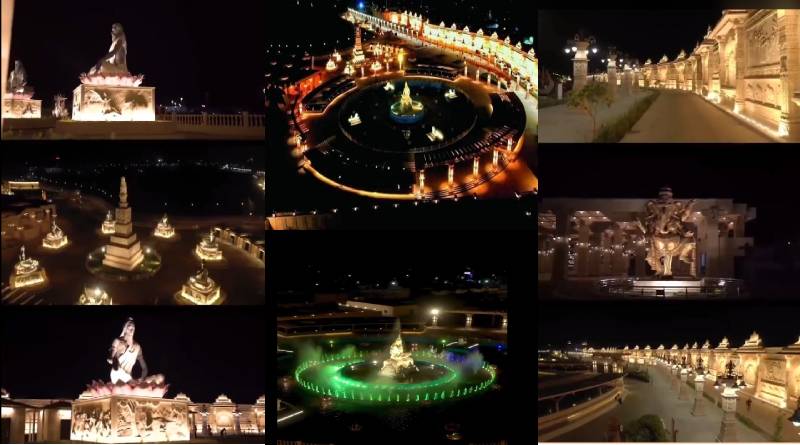 The corridor is being developed in two phases at a cost of Rs 865 crore. After the completion of this entire plan, the area of ​​Mahakal will be 47 hectares, which is 2.8 hectares now. which is expected to significantly boost tourism in this holy city of Madhya Pradesh. A large-size ‘shivaling’ covered in strands of ‘moli’ (sacred) threads has been placed below the grand gateway — Nandi Dwar — of the ‘Mahakal Lok’, sources said.

After this the devotees will be able to reach the sanctum sanctorum of the Mahakal temple using the 946 meter long corridor. It has a 25 feet high and 500 meters long mural wall. Along with this, 108 Shiva pillars, various postures of Shiva have also been constructed. The Ananda Tandava form of Lord Shiva is depicted in these pillars.

Religious idols depicting Lord Shiva have been installed along the Mahakal path. The wall paintings along the path are based on stories from the Shiva Purana.

Along with lotus pond, open air theater, lake front area and passage for e-rickshaws and emergency vehicles have also been made.

After visiting the temple, the Prime Minister will reach the Nandi gate of the Mahakal Corridor and dedicating the Mahakal Lok to the country and worshiping here will see the Mahakal path.

After this he will address the gathering at Karthik Mela Ground. For the security of Narendra Modi, 6 thousand soldiers have been deployed.

The program to be held on Tuesday will be broadcast live in 40 countries. At the same time, singer Kailash Kher will sing the praises of Mahakal. Apart from this, artists from Madhya Pradesh, Kerala, Gujarat, Jharkhand will give cultural performances.

During the program, 60 km from Indore to Ujjain area has been decorated.

Reddy also shared another video on Twitter showing the sculptures, murals and other structures of the corridor. Madhya Pradesh cabinet minister Bhupendra Singh had earlier said that Prime Minister Modi will land in Ujjain around 5:30 PM on October 11.

PM Modi’s chopper will land at a helipad located in the Police Line campus here. The span of the designated helipad has been widened to facilitate landing on the day of the event. “Mega arrangements have been made for the opening of the ‘Mahakal Lok’ that will be dedicated to the people by the prime minister. After reaching Ujjain, he will drive to the temple complex in his motorcade and perform a ‘puja’ at the Mahakaleshwar Temple. After that, he will go to the ‘Nandi Dwar’ and inaugurate the corridor,” said a senior official of Ujjain Smart City Ltd, which has executed the project. As he will travel through the corridor, a large number of artistes will perform along the route.

Chief Minister Shivraj Singh Chouhan on Sunday evening took stock of the preparations and oversaw dress rehearsal of various cultural performance that will be held in the corridor premises — from Nandi Dwar to the temple — to welcome PM Modi.

Later, at a grand event the same day at the Kartik Mela ground, well-known singer Kailash Kher will perform a special anthem — ‘Jai Shri Mahakal’, a ‘Shiva Stuti’ dedicated to Lord Shiva, the presiding deity of the ancient temple.