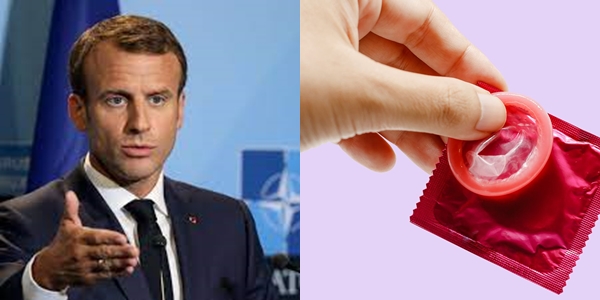 PARIS: French President Emmanuel Macron announces on Thursday that, from January 1, access to condoms would be free in pharmacies for young adults 18 to 25.

According to the news agency Reuters, Macron said in a press conference, “From January 1, all youths between the ages of 18 and 25 will be able to get free condoms at pharmacy shops.”

Condoms to be free for young people in France, Macron says https://t.co/RvpuGac2aO pic.twitter.com/wRA6h5P38u

According to the statement, ” This is a small revolution in prevention,” the president said at a session of the National Council for Refoundation (CNR) devoted to the health of young people and held in Fontaine-le-Comte near Poitiers.

Condoms were already being reimbursed by Social Security when prescribed by a doctor or midwife since 10 December 2018, as an additional tool to fight AIDS and sexually transmitted infections, he added.

The government says that this step is being taken to prevent the spread of sexually transmitted diseases and unwanted pregnancy.

There is already a provision in the country to get back the cost of buying condoms on the prescription of a doctor or midwife.

“We have a real issue” where the sexual health of young people is concerned, Macron said.

He mentioned in particular the vaccination of teenagers – girls and boys – against papillomavirus infections, which are linked to the appearance of several cancers.

“It’s a huge information job. We need to get it into schools, we need to increase our efforts and we are going to make this investment,” he said.

Health officials in France estimate that the rate of spread of sexually transmitted diseases in the country is 30 percent in the years 2020 and 2021.