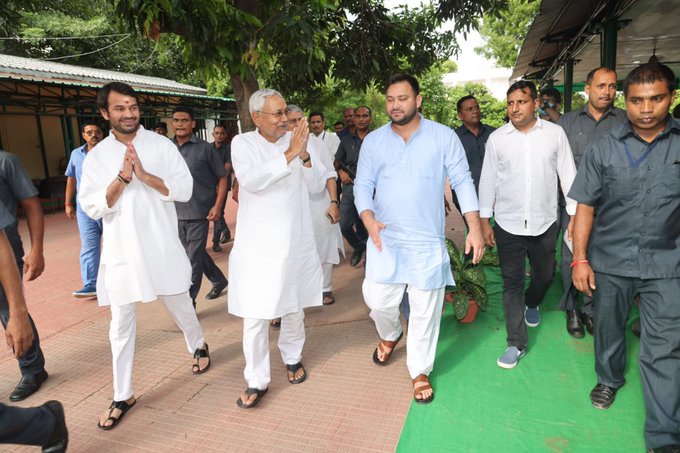 PATNA: The renew government of the Grand Alliance led by JDU and RJD will take oath at 2 pm on Wednesday at the Raj Bhavan.

The Rashtriya Janata Dal wrote in a tweet, “Honorable Chief Minister and Deputy Chief Minister will have an oath-taking ceremony tomorrow at 2 pm at Raj Bhavan.”

Earlier, Nitish Kumar and Tejashwi Yadav met Bihar governor Phagu Chauhan on Tuesday and staked claim to form a new government of the Grand Alliance in the state.

Addressing a joint presser with Tejashwi after meeting the governor, Kumar said, “I came here to meet Governor and gave my resignation. There are seven parties, including 164 MLAs along with Independents in Mahagathbandahan.”

Earlier, the Janata Dal-United (JD-U) supremo resigned as the chief minister of the NDA government and submitted to the governor a support letter of 160 MLAs. Speaking to reporters after putting in his papers, Nitish Kumar said the decision to leave the NDA was taking by the JD(U).