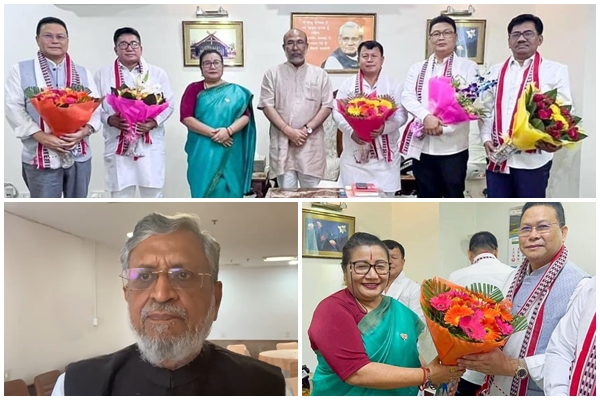 What did Sushil Modi say on the allegation of negotiate?

Manipur/Bihar: In Manipur, five out of six Janata Dal United MLAs have joined the ruling Bhartiya Janata Party (BJP) a day after. Senior BJP leader Sushil Modi has termed this incident as a rebellion of MLAs. He said on Saturday, that the state has become JDU-free.

Sushil Modi has shared a video on his Twitter. In this video he is saying, “There has been a rebellion in the Manipur unit of JDU. The Manipur unit does not agree with Nitish ji’s decision in which he broke the alliance with BJP and joined hands with RJD and Congress. So five of his MLAs revolted and join BJP and Manipur became free from JDU.

Sushil Kumar Modi said that Bihar is also going to be JDU free. He said, “In the coming days, Lalu Prasad Yadav will break your party and free Bihar from JD(U). A large number of MLAs will move to RJD, some will go to Congress and some people will come to BJP.”

At the same time, Nitish Kumar compared the defection in Manipur to horse-trading of MLAs and said, “When we were in NDA, they did not give anything to our MLAs. Now they have won their hearts.”

What did Sushil Modi say on the allegation of negotiate?

On the allegation of negotiate, Sushil Modi said, “Lallan ji is saying that your MLAs have been bought. Are your MLAs for sale? Can anyone buy your MLAs. These allegations are baseless and misleading. To buy someone.” There is no need. They did not agree with your decision, so they have joined BJP.”

Who are the five JDU MLAs

The Assembly Secretariat issued a statement saying that the Speaker of the Manipur Legislative Assembly has accepted the merger of five JD(U) MLAs with the BJP under the Tenth Schedule of the Constitution. It includes B. Joykishan Singh, Nagursangalur Sanate, Mohd. Achab Uddin, Thangjam Arun.

Has expressed happiness while accepting the merger of the BJP. These names include K. Joykishan Singh, Nagursangalur Sanate, Mohd. Achab Uddin, Thanjam Arunkumar and LM Khoute.

The Bharatiya Janata Party had secured a majority of 32 seats in the 60-member Manipur Assembly in the recently held assembly elections, the results of which were declared on March 10.