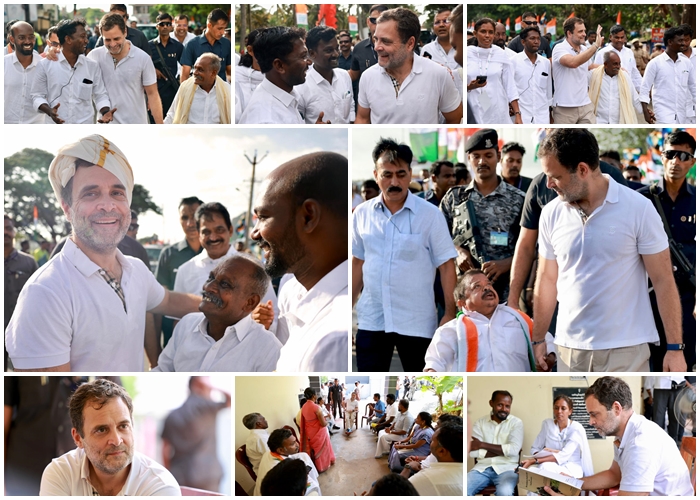 Meanwhile, The BJP on Friday took a dig at Congress leader Rahul Gandhi over the expensive piece of clothing.  BJP targeted that the Rahul Gandhi wore a Burberry t-shirt that reportedly cost over Rs 41,000, during a part of the ongoing “Bharat Jodo Yatra”.

In a tweet, BJP claimed “Bharat Dekho” and shared a picture of Rahul Gandhi in a white Burberry t-shirt, and side by side posted the cost of the T-shirt with the caption.

Rahul Gandhi replied in Hindi and twitted, “Hey… are you scared? (After) seeing the crowd gathered in ‘Bharat Jodo Yatra. Talk about the issue… Speak on unemployment and inflation. If we have to discuss clothes, then Modi ji’s suit that costs Rs10 lakh and glasses that cost Rs1.5 lakh will also be talked about,”

Speaking to the media during the Bharat Jodo yatra, which started from Kanyakumari on Thursday, Gandhi said Yatra was an attempt to ‘connect with people” and to “undo the damage caused by the BJP and RSS.

During the yatra, Rahul Gandhi catches up with team of “Village cooking Channel.

Our yatra aims to connect the people of India at the root level and there’s no way to do it without the inclusion of our Panchayats.

On day 3 of the #BharatJodoYatra in Tamil Nadu, Shri @RahulGandhi interacted with Panchayat Presidents. pic.twitter.com/tBB1npmZlF

The Bharat Jodo Yatra will help in forging Opposition unity even though that is a separate exercise, Congress leader Rahul Gandhi said on Friday. Speaking to the media during the yatra which started from Kanyakumari on Thursday, he said the idea of this march is to connect with the people, listen to them, understand what they are facing and also communicate to them a few things.

“Nothing from the past is going to save us. Those who have nothing to offer constantly dig into the past. Actions taken by us today will save the country,” the Congress leader added.