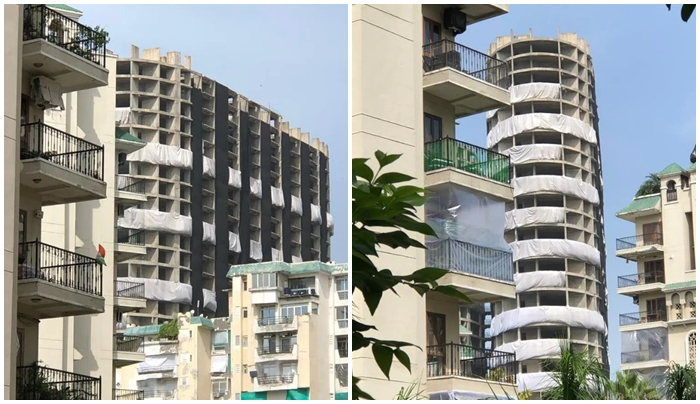 NEW DELHI: The countdown has started for the 103 meter high twin tower built in Sector-93A of Noida. They will be demolished at 2.30 pm. In just 9-12 seconds a building taller than Qutub Minar will be demolished.

The process of twin tower building demolition for the first time in the country. For its demolition, 3700 kg of explosives have been used in about 9640 holes. People living in the surrounding societies have started vacating the flats.

Around 5,000 residents of Emerald Court and ATS Village societies near the Supertech Twin Towers in Noida were evacuated ahead of the demolition set to take place at 2:30 pm on Sunday.

The police is constantly getting the people to vacate the area. At the same time, many people are reaching to have their photos taken with the tower. The stray animals present around the Twin Towers are being rescued. The Noida-Greater Noida Expressway will remain closed for an hour due to the blast. At the same time, traffic restrictions have started around the Twin Towers from 7 am.

Some scientists have come from Hyderabad who will install instruments to measure vibration, about 15 instruments are to be installed. So that it can be found out how much vibration was there. So far seven devices have been installed, all the devices will be installed by one o’clock.

Due to the roadblock across parts of Noida ahead of the demolition of Supertech’s Twin Towers, a traffic jam lead to cars stuck on the service road leading to Fortune School Road on the Greater Noida Expressway.

As per the ANI report, NDRF team arrives for deployment in the area of demolition of Twin Tower and 560 police personnel deployed. While, 100 people from reserve forces along with four Quick Response Teams are also deployed here.

About 40 stray dogs shifted outside Twin Towers. while, admin urged to hold ‘dummy explosion’ to save birds

According to the new report, At least 40 stray dogs who, living the Supertech twin towers Noida have been shifted temporarily to shelters run by NGOs ahead of the court-mandated implosion of the buildings on Sunday. An NGO has also requested authorities to conduct a dummy explosion or a false firing just before the twin towers are razed in order to save the birds in the area.

Several NGOs, including House of Stray Animals, Friendicoes, Society for the Prevention of Cruelty to Animals (SPCA) and Happy Tails foundation have pitched in to accommodate the stray dogs temporarily. Around 5,000 residents of the two housing societies near Supertech twin towers have also been evacuated in view of the implosion planned at 2.30 pm.