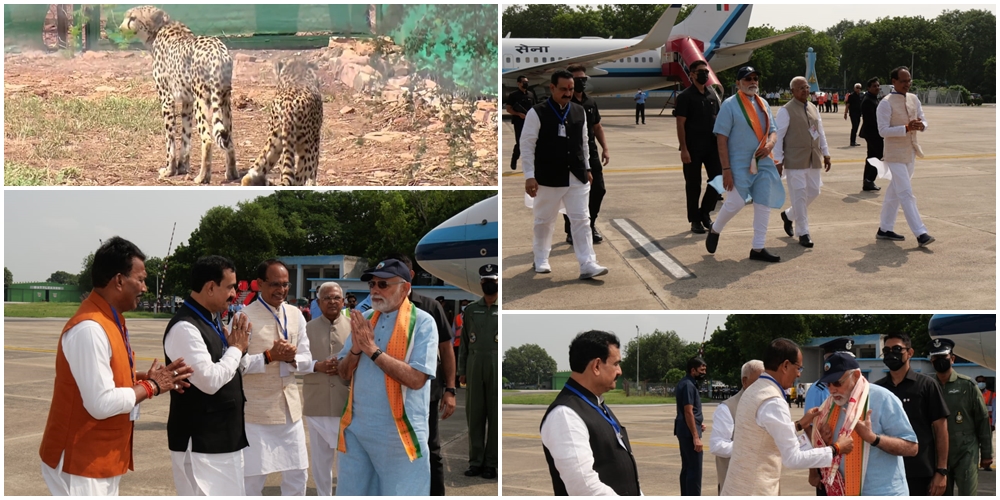 On PM Modi’s birthday, Cheetahs reintroduced in India after 70 years

GWALIOR: On his 72nd birthday, Prime Minister Narendra Modi has released eight cheetahs in Kuno National Park in Madhya Pradesh in the presence of Chief Minister Shivraj Singh Chouhan and wildlife experts. All eight cheetahs have been kept in special enclosures over 10 km inside the park, according to DD News.

A day after return from Samarkand after attending the SCO summit, PM Modi will have a busy day on his birthday today as he will attend four important events. India welcomes PM Modi’s 72nd birthday. Tibetan spiritual leader Dalai Lama congratulate PM Modi and said, “on the occasion of India Prime Minister Narandra Modi’s seventy-second birthday I have written to him to offer my warmest good wishes and prayers for his continued good health”.

All these cheetahs have been brought to India from Namibia. Which, the age of 5 females is between 2 and 5 years, while the age of male cheetahs is between 4.5 years and 5.5 years. Cheetah was declared extinct in India in 1952.

The South Africa government will keep an eye

The ‘African Cheetah Introduction Project in India’ was started in 2009. India had signed a Memorandum of Understanding (MoU) with the Government of Namibia for the import of cheetahs. Other cattle in the villages have also been vaccinated so that there is no infection in the cheetahs.

A special circle of 5 square kilometers has been made for cheetahs. The South African government and wildlife experts will keep an eye on them. It may take one to three months for cheetahs to adapt to the Indian climate here.

Prime Minister Narendra Modi releases the cheetahs that were brought from Namibia this morning, at Kuno National Park in Madhya Pradesh. pic.twitter.com/dtW01xzElV

First visuals of a #Cheetah, being transported from Namibia to India! #CheetahIsBack

Cheetahs are one of the oldest of the big cat species with ancestors dating back about 8.5 million years

One of the oldest of the big cat species, with ancestors dating back about 8.5 million years, cheetahs once roamed widely throughout Asia and Africa in great numbers, said CCF. But today only around 7,000 remain, primarily in the African savannas.

Earlier visuals on chopper with cheetahs landing in MP

Why were cheetahs imported from Namibia?

Except in the Himalayan region, there was no place where cheetahs were not found in India. Asiatic cheetahs are still found in Iran, Afghanistan. Cheetahs are coming from Namibia in South Africa because the length of day and night there is exactly the same as in India and the temperature here is also similar to Africa.