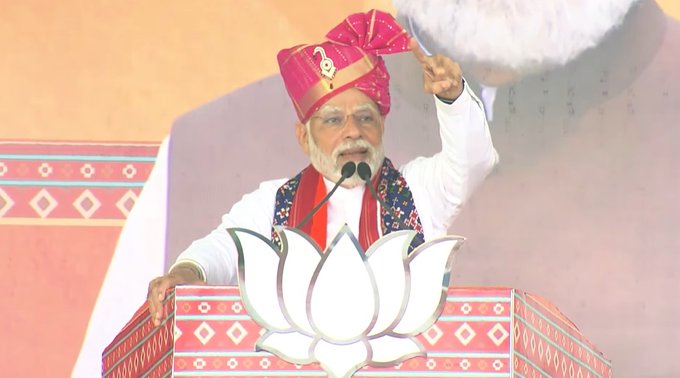 KALOL (GUJARAT): Voting is underway for the first phase of Gujarat Assembly elections. During the polling, Prime Minister Narendra Modi holding an election rally for the second phase in the state. Addressed a public meeting in Kalol, PM Modi attacked over Congress president Mallikarjun Kharge’s ‘Ravan barb” remarks and asserted that there’s competition in the grand old party on “who can abuse him more”.

He said More opposition attacks him and the Bharatiya Janata Party (BJP), the more trust people will show in him.

PM Modi said that before 2014 no one had thought that India would bring such a revolution in mobile phones. When you sent me to Delhi in 2014, there were two factories for making mobile phones, today there are more than 200.

The more mud you throw, the more the lotus will bloom.

In fact, Congress President Mallirjun Kharge compared PM Modi to Ravana during an election rally. Even before this, the Congress leader had mentioned the word ‘aukat’ while making a statement about PM Modi. Regarding this, PM Modi today took a dig at the Congress and targeted it fiercely. He said that ‘the more mud people throw, the more the lotus will bloom’. Those who do not believe in the existence of Ram or the grand Ram temple in Ayodhya and oppose Ram Setu should bring Ravana from Ramayana to abuse Modi.

“Congress friends must listen carefully, if you want to live for a family, that is your choice, but let me tell you, the more mud you throw, the more the lotus (BJP’s symbol) will bloom,” PM Modi said triggering a thunderous applause from the crowd.