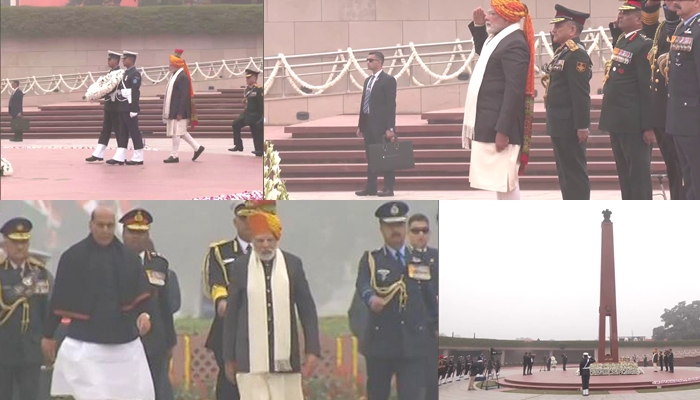 India is celebrating its 74th Republic Day today with security in the national capital beefed up in preparation for the annual parade.

On this occasion, a grand parade has been organized on the duty path of Delhi where Egyptian President Abdul Fatah al-Sisi is attending as the chief guest along with Prime Minister Narendra Modi.

After paying tributes at the National war Memorial, Prime Minister Narendra Modi puts down his remarks in the digital Visitor’s Book of the National War Memorial in Delhi.

#RepublicDay | PM Modi leads the nation in paying homage to the fallen soldiers at the National War Memorial in Delhi pic.twitter.com/CE9B2CPZmB

Prime Minister Narendra Modi paid tribute to the soldiers who died for the country at the National War Memorial.

He then signed the digital visitor’s book. Today the country is celebrating 74th Republic Day.

On this occasion, a grand parade has been organized on the duty path of Delhi where Egyptian President Abdul Fatah al-Sisi is attending as the chief guest along with Prime Minister Narendra Modi.

On this occasion, Prime Minister Narendra Modi congratulated the country and said that “”Many wishes for the Republic Day. This time this occasion is also special because we are celebrating it during the Amrit Mahotsav of Independence. We wish to move ahead unitedly to make the dreams of the great freedom fighters of the country come true. Happy Republic Day to all fellow Indians,” said Prime Minister Narendra Modi in a tweet in Hindi.”

At the same time, the Defense Minister also hoisted the tricolor at his residence in Delhi.

He wrote on his social media account, “Today is an opportunity for all Indians to strengthen the country’s constitutional traditions and rededicate themselves to the resolve to build a new India.”

Every year, millions of Indians witness the rich tradition, cultural heritage, spectacle of the nation’s progress and achievements, in the grand parade.

However, you might be wondering how the nation celebrated its first Republic Day in 1950.

January 26 was chosen as Republic Day since it was on this day that the Indian National Congress declared ‘Purna Swaraj’, opposing the British regime’s dominion status in 1929.

In 1934, MN Roy initiated a move to draft a constitution for India and subsequently to form a Constituent Assembly.

The British Government accepted the demand in 1940. Dr BR Ambedkar was appointed as the chairman of the drafting committee of the constitution. The constitution was finally adopted by the Constituent Assembly on November 26, 1949, and that’s why November 26 is celebrated as Constitution Day.