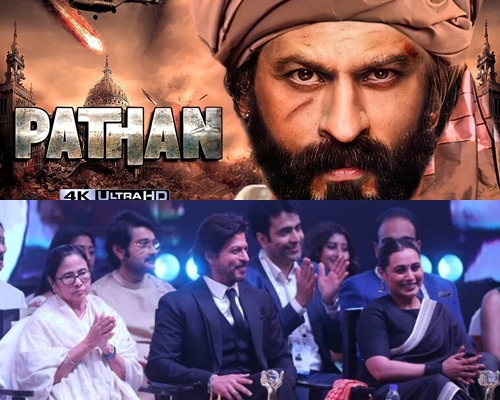 Actor Shah Rukh Khan inaugurated the 28th edition of the Kolkata International Film Festival along with Amitabh Bachan on Thursday.

During the speech, He said that the role of cinema is important in such times. Shahrukh described cinema as its counter narrative.

Speaking at the Kolkata Film Festival, Shah Rukh said, “Cinema and social media are new ways of speaking and now the best medium to express human experiences and emotions.”

“The narrative of our times is being shaped by social media. And apart from the perception that social media will have a negative impact on cinema, I think cinema has to play a bigger role now.”

At KIFF 2022, without particularly mentioning the social media reactions of people to Pathan, SRK said, “Cinema and advent of articulation through social media platforms have now become the foremost expression of human emotions and experience. The collective narrative of our times is shaped by social media and contrary to the belief that the spread of social media will affect the cinema negatively, I believe cinema has an even more important role to play now.”

He said that social media is generally run by a narrow ideology and it limits human nature.

Shahrukh said, “I had read somewhere that negativity increases the use of social media and its commercial value too.” This creates a divisive and destructive narrative.

He said, “Cinema connects with human beings by telling stories in a simple way, just as they live it. It helps us understand each other better. Cinema is best suited to create a counter narrative, that reaches a large audience.”

The first song ‘Besharam Rang’ from the Shahrukh Khan and Deepika Padukone starrer film Pathan went viral on the internet, but along with it, demands for boycott of the film also started rising on social media.

The chemistry between Deepika Padukone and Shah Rukh Khan is shown in the song and at one place Deepika is wearing a saffron colored bikini.

Some people called this song lewd and obscene, while some called it hurtful to the sentiments of Hindus.

Many people say that the color of Deepika’s clothes is saffron and the name of the song in which this scene is played is “Besharam Rang“. Saffron color is often associated with Hinduism.