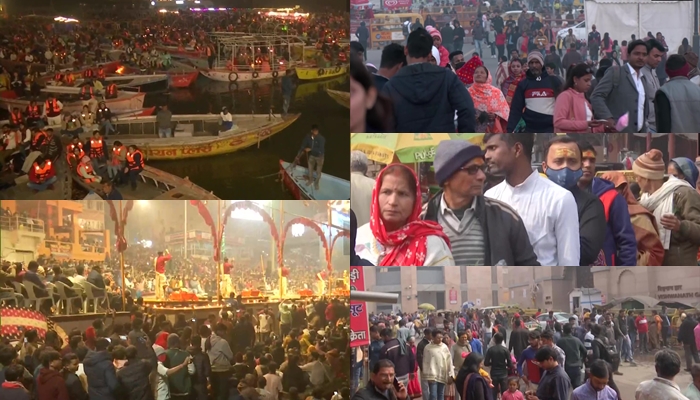 NEW DELHI: On the last day of the year 2022, people have gathered in large numbers on temples and tourist places across the country. Especially in the country’s largest state Uttar Pradesh.

This times the year 2022 is ending on Saturday and the year 2023 is starting on Sunday while tourists seem all geared up for festivities.

People’s enthusiasm about the arrival of the New Year can be seen in many pictures from Varanasi and Agra of the state.

Uttar Pradesh | Devotees throng bylanes and temples in Varanasi on the eve of New Year.#NewYearsEve pic.twitter.com/kr5Z7EquU2

According to news agency ANI, a large number of people were seen standing in queues to have darshan of Lord Shiva at the Kashi Vishwanath temple in Varanasi, the city of ghats and temples.

On the other hand, people have reached in large numbers at the nearby Dashashwamedh Ghat to see the Ganga Aarti to be held in the evening.

Uttar Pradesh | Devotees gather in large numbers on the ghats of Varanasi for evening prayers ahead of #NewYear pic.twitter.com/10luEKQfeD

The tourists who came to see the Taj Mahal looked very excited. In the Taj city of Agra, a large numbers of people came to visit on Saturday.

UP | Tourists in large numbers turned out to visit the Taj Mahal in Agra on the last evening of the year 2022 pic.twitter.com/eF8xvwTrto

In the country’s capital New Delhi too, people have started celebrating the new year in their own way.

People can be seen roaming there in the photographs of India Gate, the identity of the metropolis.

At the same time, pictures have also come out from the North and South Block, located near India Gate, where the administrative department of the country sits.