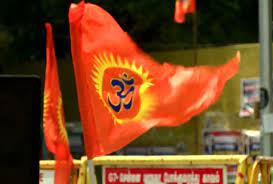 The Vishwa Hindu Parishad (VHP) has demanded action against Sarwar Chishti, secretary of the Anjuman Committee of Ajmer’s Dargah Sharif, and his son Adil Chishti.

A days after Sayed Sarwar Chishti, the Khadim of the Ajmer Sharif Dargah, kiked up a raw with his provocative remarks, his son Adil Chishti made highly objectionable and derogatory statements against Hindu gods.

VHP joint general secretary Surendra Jain has issued a video statement saying that due to his poisonous statements, an atmosphere of hatred has been created in the country, slogans of separation from the body were raised and then Kanhaiya was killed.

He has also raised strong objection to the video released by Adil Chishti. Surendra Jain said that Hindu deities have been mocked in this video and it is highly objectionable.

Surendra Jain said- If you make fun of the deities of others and if someone says this much about Prophet Mohammad Sahib, what other people have also said, then you will separate his head from the body. Which civilization is this, what is this way.

Appealing to the Rajasthan government, he said- If you are really serious about respecting the faith of Hindus, for the safety of their lives and property, then action should be taken against all these chishtis of Ajmer’s Dargah Sharif. Sarwar and his son Adil should also be sent behind the bars.

Surendra Jain challenged and said that you people are crossing the borders and if Hindu also crosses the borders, then what will happen. Now no one is afraid of your threats. Now Hindus will not tolerate insult of Hindus.