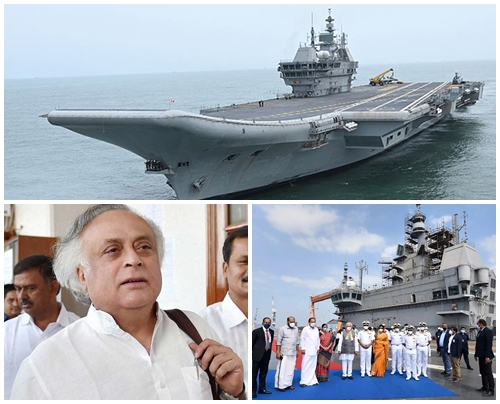 NEW DELHI: Senior Congress leader Jairam Ramesh has attacked the BJP government at the Center on the warship INS Vikrant.

According to the Tweeting a video by Jairam Ramesh of the Defense Minister AK Antony, Jairam Ramesh said that even before 2014, India was self-reliant.

He wrote that “Then Defence Minister AK Antony launched India’s first indigenous aircraft carrier INS Vikrant on 12 August 2013, while the Prime Minister commissioned it today. A self-reliant (Aatmanirbhar) India existed before 2014. All other Prime Ministers would have acknowledged continuity in governance”.

Then defence minister AK Antony launched India’s first indigenous aircraft carrier INS Vikrant on 12.08.2013. The PM commissioned it today. A self-reliant(Aatmanirbhar) India existed before 2014. All other Prime Ministers would have acknowledged continuity in governance. pic.twitter.com/9IKqEoayzC

AK Antony was the Defense Minister in UPA-2. In the video, AK Antony is congratulating India for the landing of INS Vikrant and telling that India is the sixth country in the world to build it.

Jairam Ramesh’s statement has come at a time when today India is adding its largest warship Vikrant to its fleet.

It has 2300 compartments inside and you will forget that it is a ship as soon as you enter. On the 262 meter long and 60 meter high ship, no special effect of the strong waves of the sea is felt.

Wide paths and stairs connect the ship, so it is not difficult to go from one place to another. Air conditioners do not allow outside humidity and heat to enter.

1700 people will work in the new Vikrant. However, 2000 more people are also working in it, who are responsible for fixing cables, polishing and interior work.

There is a huge medical facility at Vikrant. There is also a 16-bed hospital, two operation theatres, a lab. ICU and CT scan. There are five officers, doctors and 15 paramedics.

30 fighter planes and helicopters can be placed on this ship.

It is a moment that was 13 years in the making: PM Modi

The vessel – 262m (860ft) long and almost 60m (197ft) tall – is the first aircraft carrier India has designed and built on its own. It has the capacity to hold 30 fighter planes and helicopters.

Modi called the carrier “a floating city” and the “symbol of indigenous potential”.

“With INS Vikrant, India has joined the list of countries which manufacture huge aircraft carriers with indigenous technology. It has filled the country with a new confidence,” he said at the commissioning ceremony.