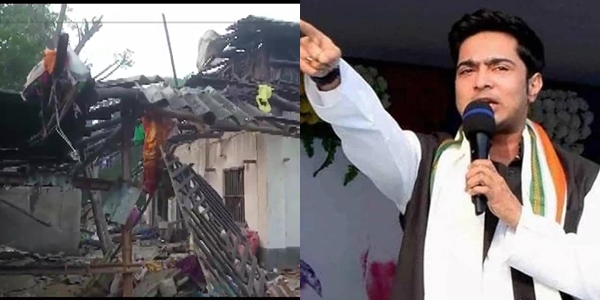 KOLKATA: Three people were killed and two were injured in a massive bomb blast at the house of a Trinamool Congress leader late on Friday night at Kanthi in East Medinipur district of West Bengal.

Significantly, a rally of CM Mamta Banerjee’s nephew and Trinamool Congress (TMC) general secretary Abhishek Banerjee is to be held at Kanthi in the Purba Medinipur district of West Bengal. Kanthi is the bastion of BJP leader Suvendu Adhikari.

According to reports, the blast took place on Friday night in Narayvila village of Arjunnagar gram panchayat under Bhupatinagar police station area of Bhagwanpur-2 block of Kanthi. TMC leader Rajkumar Manna is also among the dead. Local residents said that the other two killed in the incident are Devkumar Manna and Biswajit Gayen. Rajkumar and Devkumar are brothers.

Leader of the Opposition Shubhendu Adhikari’s house is also not far from the spot.

The round of allegations and counter-allegations has also started regarding this blast. The BJP has alleged that the people of Trinamool were making a bomb in the house, due to which this accident happened.

Since the assembly elections last year, this area has often been in headlines for violence.

BJP leaders said that bombs were being made at the houses of TMC leaders, that’s why the blast took place. However, the investigation into the blast is underway.

Bhagwanpur’s BJP MLA Rabindranath Maity said, “The incident took place during the making of bombs in the dark of night. The death toll could be high. Now, with the help of the police, a conspiracy is being hatched to make the bodies disappear.”

Another BJP leader from Kanthi, Tapas Kumar Dolui, also alleged, “The accident happened while making a bomb at the Trinamool Congress leader’s house.”