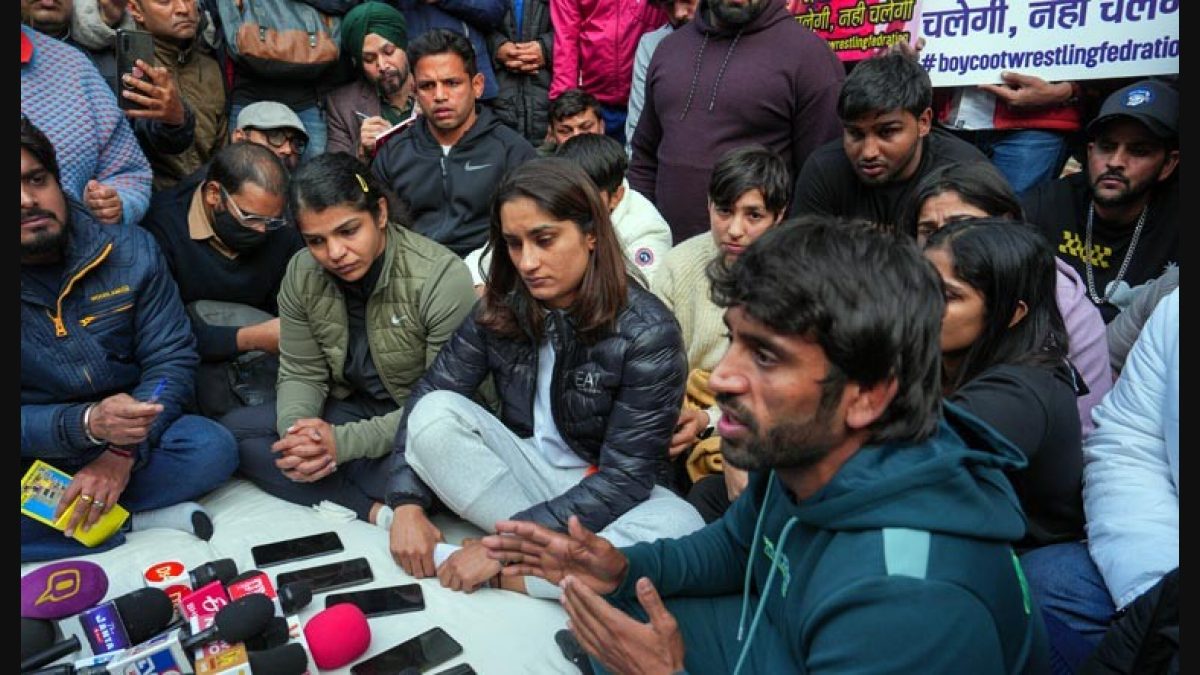 LUCKNOW: Indian Wrestlers Protest which started on Wednesday continues. Today is the third day of the protest. 30 wrestlers from India started the protest on Wednesday at Delhi’s Jantar Mantar. Now many other wrestlers and wrestling coaches have come in his support. Many politicians have also supported the protesting wrestlers.

Wrestlers have accused Indian Wrestling Federation president Brij Bhushan Singh of arbitrariness and sexual exploitation of women. Wrestlers demand that Brij Bhushan Singh should be removed and wrestling association should be abolished and a new association should be decided. To end this demonstration, the Sports Ministry also talked to the wrestlers, but after the talks, the wrestlers were not satisfied and their demonstration continues.

Under pressure to resign from his position over allegations of sexual exploitation of women wrestlers, Wrestling Federation of India (WFI) chairman Brij Bhushan Singh will hold a press conference today to clarify the allegations leveled against him. He has said that he will expose the political conspiracy on Friday afternoon during the press conference.

Singh who is also a BJP Lok Sabha MP from Kaiserganj in Uttar Pradesh in a post on his Facebook said that he will hold a press conference at the Wrestling Training Centre in Nawabganj in Gonda District of the state.

On Wednesday, 30 Indian wrestlers sat on a dharna at Jantar Mantar in Delhi. These included big names like Bajrang Punia, Vinesh Phogat and Sakshi Malik. Wrestlers made many serious allegations against Wrestling Federation President Brij Bhushan Singh. The wrestlers demanded his removal. The wrestlers also said that Brij Bhushan is running the wrestling association in an arbitrary manner. In many competitions, coaches are not sent with the wrestlers and they are threatened for protesting. Vinesh Phogat said that Brij Bhushan has exploited many girls. Even their loved ones do the same. Apart from girls, male coaches also exploit female coaches. on

Brij Bhushan Singh hit back and said that ever since the trial scale has been made to send the players to any competition, since then these wrestlers are unhappy. These players do not want to play national games and do not want to give trials. This is the reason why there is opposition. Most of the wrestlers are with the union.

The wrestlers claimed that there were five to six girls with them who had been sexually assaulted and that they had enough evidence to prove it, but did not want to make the evidence public. The wrestlers also said that they would take the matter to the court. The wrestlers have made it clear that their protest is separate from politics and they do not need the support of any politician.

Meanwhile, an attempt was made to negotiate on behalf of the wrestling association. Sports Ministry officials and Union Sports Minister Anurag Thakur also spoke to the wrestlers, but to no avail. Wrestlers had a long discussion with the Sports Minister but the result did not come. Wrestlers are adamant on demanding the resignation of Brij Bhushan Singh.