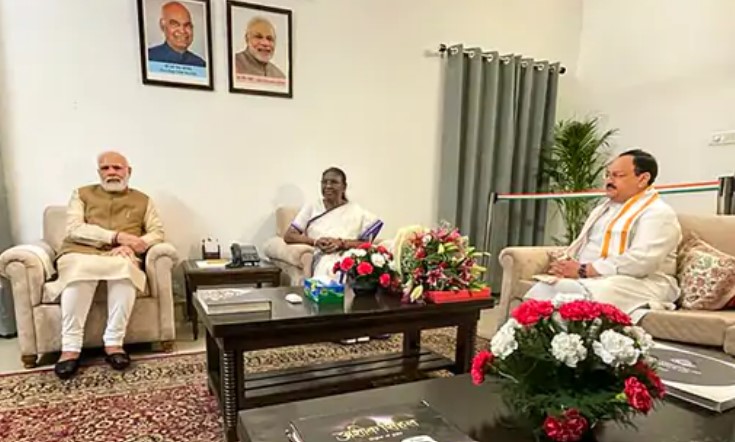 New Delhi: NDA candidate Draupadi Murmu has won the presidential election by a huge margin. Murmu will be the 15th president of the country. She is the first tribal and second women President. National Democratic Alliance (NDA) candidate Murmu defeated United Progressive Alliance (UPA) candidate Yashwant Sinha in the third round of the counting which started at 11 am on Thursday.

However, the joint candidate of the opposition Yashwant Sinha got less votes than expected. The BJP claims that around 17 MPs also did cross voting. It has also out in the results. However, Yashwant accepted his defeat and did not delay in congratulating Draupadi Murmu. He also tightened his taunt with congratulations.

Yashwant Sinha said, I congratulate Mrs. Draupadi Murmi ji on her victory in the presidential election 2022. I hope that in fact the people of India expect that as the 15th President of India, he should act as the custodian of the Constitution without any ‘fear’ or favoritism. I extend my best wishes to the countrymen.

Yashwant further said, whatever the results may have been, but I believe that this has brought two benefits to Indian democracy. First most opposition parties came on one platform. This is really the need of the hour. I demand the leaders of the opposition to maintain unity and strengthen it even after the Presidential elections. This should be clearly visible in the Vice Presidential election. He said that the second advantage has been that the views and concerns of the opposition parties were put before the country and the common people.

Murmu got the required 5,43,261 votes in the third round. Sinha could collect only 2,61,062 votes, who includes votes from 20 states including Rajya Sabha and Lok Sabha MPs.

Meanwhile, Sinha also attacked the BJP government and said, agencies are also being misused to cause defections and bring down the governments run by the opposition parties. The people of India have never seen so much corruption in politics. Polarizing toxic politics has become a serious threat to democracy and communal harmony in India.

PM Modi said – India has written history. As the country celebrates the nectar festival of Independence, the daughter of a tribal community born in a remote part of eastern India has been elected president.

Murmu twitted and said, “Elated by all of the support from my all political colleagues Ministers, MP’s and MLA’s from all -around India for choosing me to serve as the 15th President in the world’s largest democratic country Mother India.

“I extend my heartiest gratitude to all my brothers and sisters throughout India who have supported me to reach at the Highest Commandant of Indian Army. I am devoted to work for the people of my great motherland India,” Murmu added.

She also said, “When I was Nominated as NDA’S presidential candidate from that day I took oath in my mind that If I become President, first of all I will work for more development of my tribal and adivasi brothers and sisters of Whole India & Odisha. Now that time has came I will keep my promise.”