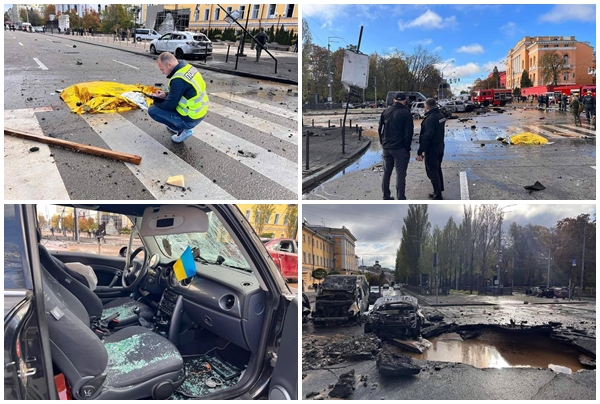 ‘They (Russia) are trying to destroy us,’ says Ukrainian President Volodymyr Zelensky

KIVY (UKRAINE): Eight civilians were killed and 24 are said to be injured in Monday morning after Russian missiles hit on the Ukrainian capital, Kiev, according to BNO News.

Ukraine’s interior minister said in a Facebook post that six cars were set on fire and about 15 vehicles were damaged in the attack.

For some time, Zaporizhzhya has been a constant target of Russia and so far dozens of people have died here.

Multiple strikes in central Kyiv and across Ukraine this morning. Russia escalates its barrage of attacks on Ukrainian civilians.

In a Telegram post, he wrote, “They are trying to destroy us and wipe us off the face of the earth,” President Volodymyr Zelenskiy said on the Telegram messaging app. “The air raid sirens do not subside throughout Ukraine. There are missiles hitting. Unfortunately, there are dead and wounded.”

In addition to Kiev, Zelensky referred to the attacks in Lviv, Dnipro and Zaporizhzhya, saying, “Unfortunately there have been deaths there. There are injured people.” He has appealed to the people to stay in the bunkers.

He tweeted, “What they are destroying is the future of Russia, which cannot be changed. The future of a globally despised terrorist nation.”

Our courage will never be destroyed by terrorist's missiles, even when they hit the heart of our capital. Nor will they shake the determination of our allies. The only thing they demolish irriversibly is the future of 🇷🇺 – a future of a globally despised rogue terrorist state.

Russia has yet to issue a statement regarding the attacks on Ukraine.

The local governor informed about the attack on Telegram. He told that this city, which is located close to the border with Poland, has been airstrikes in the morning.

The governor has appealed to the people to stay in the bomb shelter and not to come out.

Kiev’s local military administration told that the attacks on Kiev are still going on so people do not leave.

The US ambassador to Ukraine Bridget A Brink termed the attacks, “itsbarrage of attacks on Ukrainian civilians.

“Several explosions in the Shevchenkivskyi district- in the centre of the capital,” Kyiv mayor Vitali Klitschko said on social media.

This is *right* in the centre of Kyiv, beside a busy park at exactly the time when people were rushing to work. No confirmation yet on number of fatalities.