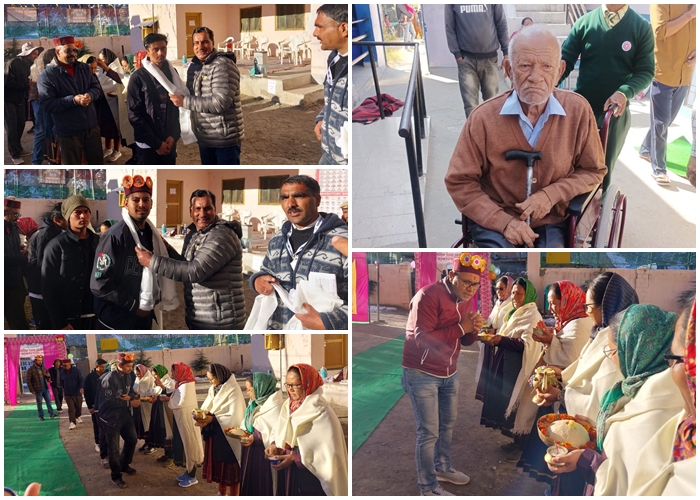 SHIMLA: Voting for Himachal Pradesh Assembly Election is underway on Saturday. Himachal Pradesh, where  the rulling BJP and the opposition Congress are locked in an aggressive fight, recorded a voter turnout of 55.65 per cent till 3 pm, said Election Commission.

According to the Election Commission, 55.65 per cent votes have been cast till 3 pm.

Chief Minister Jai Ram Thakur, voted in Mandi along with his wife and daughters after offering prayers at a local temple, while Himachal Pradesh Congress chief Pratibha Singh and her son Vikramaditya Singh voted in Rampur. Earlier in the day, the Congress leader along with her son paid obeisance at the Shani temple in Shimla.

Former chief minister Prem Kumar Dhumal and his son, and Union Minister Anurag Thakur voted in Hamirpur along with family members. Former Union minister Anand Sharma voted in Shimla while CLP leader Mukesh Agnihotri and his family voted in Haroli, from where he is contesting.

Voting began at 8 am on a slow note but picked up as the day progressed and the sun warmed the winter chill. The assembly election is a crucial test for the BJP which is hoping to beat precedent and return to power while the Congress has urged voters to go by tradition of voting out the incumbent.

A total of 412 candidates are in the fray in the assembly elections.

However, there are more than 55 lakh voters in the state.