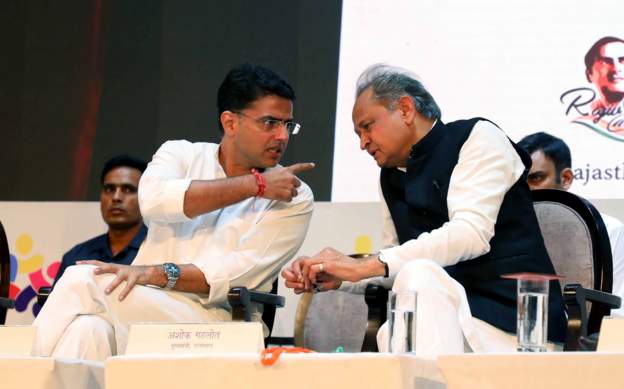 Earlier, before leaving for Delhi from Jaipur, Congress leader Mallikarjun Kharge said that he is going to tell the current situation of Rajasthan to the Congress President. The decision will be taken by the party, everyone will have to accept it.

Senior Congress leaders Mallikarjun Kharge and Ajay Maken, who arrived from Delhi as observers, also offered to meet the MLAs one by one, but the MLAs talked about meeting in different groups. With no concrete strategy being worked out, Khadke and Maken have returned to Delhi.

The ruckus in the Rajasthan Congress is increasing. There cannot be a meeting of party MLAs regarding the election of the new Chief Minister.

With no concrete strategy being worked out, Khadke and Maken are returning to Delhi.

Ajay Maken told the media that the meeting of the Congress Legislature Party was held at his residence with the consent of Chief Minister Ashok Gehlot. And the time was also kept according to their convenience. But the MLAs did not agree to the meeting.

Third condition was that the CM should be from the 102 MLAs who are loyal to CM Ashok Gehlot, not Sachin Pilot or his group. We said that their exact sentiments will be conveyed to Cong chief, who will take the decision after talking to CM Ashok Gehlot & everyone else: Ajay Maken pic.twitter.com/KNExjUL73R

What are the conditions of legislators?

Meanwhile, the dispute between Ashok Gehlot and Sachin Pilot has been going on for a long time. Angered by Gehlot, Sachin Pilot had resigned from all government posts and said that he would work for the party.

Ajay Maken said, “If he becomes the president, then empowers himself over his own resolution, then there cannot be a bigger conflict of interest than this.”

Apart from this, the MLAs have put a condition that one of the 102 MLAs who had supported Gehlot earlier should be chosen as the chief minister, not Sachin Pilot or his supporters, Maken said.

Ajay Maken said that the MLAs want resolution on the basis of their terms. It has never happened in the history of Congress that a resolution is passed on the basis of conditions. It is indiscipline for MLAs not to attend the official meeting of the party.