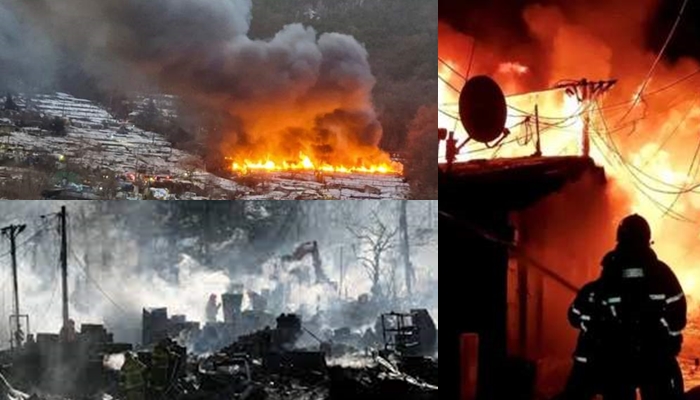 SEOUL: South Korean fire officials said that about 500 people were evacuated from their homes this morning due to a fire in the village of Guryong, the last remaining slum in the capital Seoul.

Fire officials added that the fire broke out at 6:28 a.m. (local time) in the fourth area of ​​Guryong village, located in Gangnam ward of Seoul, and it was reported that about 60 houses had been burned down. according to Yonhap news agency.

VIDEO: Around 500 people were forced to flee their homes after a fire broke out in a slum made of unlicensed dwellings located in Seoul's wealthy Gangnam district. One of South Korea's last remaining slums, Guryong village contains mostly structures made from vinyl plywood panels pic.twitter.com/3kySjlOpGm

According to South Korean media, the houses in this area are adjacent to each other. These slums are at the end of the capital.

The help of 900 fire personnel and seven helicopters was taken to extinguish the fire.

A 72-year-old resident of the affected area told Reuters news agency: “As soon as I opened the door, I saw flames rising.”

Guryong Village is located in the southern part of Gangnam Ward, which has the most expensive real estate prices in Korea. The village was formed in the 1980s, when poor residents in the area were forced to leave their homes as the city carried out development projects, according to Yonhap.