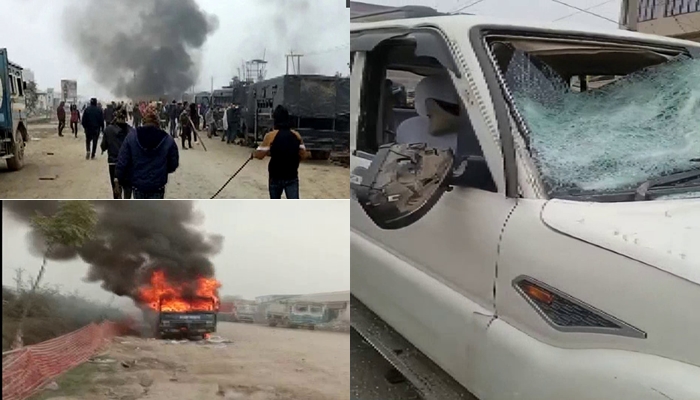 Four policemen injured in the clashes. Bihar police has been deployed in the area.

According to the news agency ANI, the protesters set the police vehicle on fire.

Bihar | Police van set on fire, govt vehicles vandalised by locals in Buxar as they alleged that police entered a farmer's house last night & thrashed him

A group of farmers are protesting here demanding better rates for their land which is being acquired for Chausa Power Plant pic.twitter.com/OKdYXIO2MC

The police tried to control the situation resorting to lathicharge, however, they had to open fire in the air as villagers turned violent.

Four policemen were injured in the clashes. More police force has been deployed in the area.

Buxar police alleges that due to this uproar, the work of the power plant had to be stopped.

Buxar SP Manish Kumar told BBC Hindi that on Wednesday morning also around 1000 farmers gathered and they created a huge ruckus. The police also used force in their defence, but according to the SP, the villagers were not hurt in this, while since yesterday till today 4 policemen have been injured in the ruckus of the villagers.

Actually, this whole matter is about the power plant being built by the Bihar government in Chausa, Buxar.

For this, several rounds of talks have also taken place between the villagers and the administration, but this conversation was closed for some time. The farmers were continuously protesting for the new compensation. The same demonstration turned violent on Tuesday and there was a lot of fuss and uproar in the fourth.