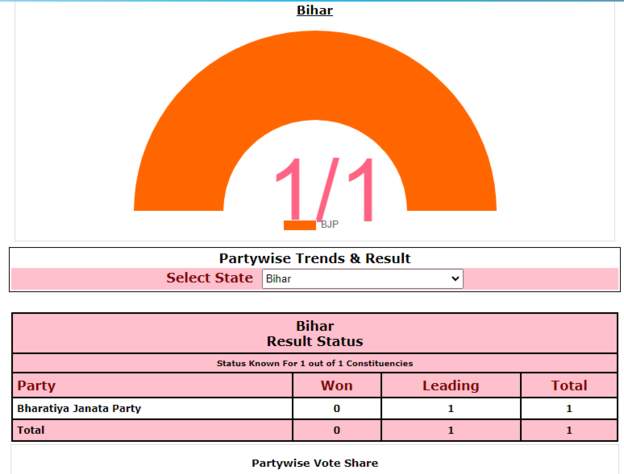 MUZAFFARPUR: Bihar Kurhani by-election: After the first round of counting of votes in the by-election in Bihar’s Kurhani assembly seat, the opposition Bharatiya Janata Party has taken a lead.

Altogether 13 candidates were in the fray, and their fates have been decided by 3,11,728 voters though the contest is being seen, primarily, between JD(U)’s Manoj Singh Kushwaha and BJP’s Kedar Gupta, both of whom have won the seat for their respective parties in the not so distant past. The bypoll, was necessitated by the disqualification of RJD MLA Anil Kumar Sahani and the party, which has come to share power after the upheaval in August, has decided to back the chief minister’s party.

A total of 13 candidates are contesting the by-elections on this seat, out of which five are independents. However, here the contest is being considered between Kedar Gupta and Manoj Kushwaha only.

According to the news report, Kedar Gupta lost by 700 votes in the 2020 assembly elections. At that time JDU and BJP contested the elections in alliance. However, now JDU is a part of the Grand Alliance, which includes RJD, Congress and Left parties.

In the by-election held on Monday in Kurhani, 58 percent votes were cast.