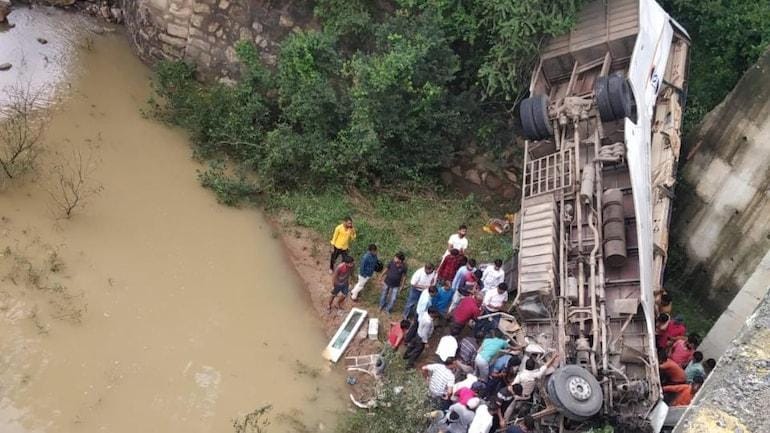 A bus fell into the Shivna River from a bridge in Jharkhand’s Hazaribagh.

RANCHI: At least  eight people died and 12 others were injured after a bus fell into a river in Jharkhand’s Hazaribagh bridge on Saturday evening. Over 50 people were onboard the bus.

As per the news agency, relief and rescue work is going on at the spot. The injured have been admitted to various hospitals in Hazaribagh.

The accident took place when the Ranchi-bound bus coming from Giridih district broke the railing of a bridge and fell into a dry spot in Siwanne River in Tatijharia Police Station area, SP Manoj Ratan Chothe said.

According to the information, the people in the bus were going to attend a religious program in Ranchi. The accident happened on NH 100 going from Chatra to Bagodar.

“Two passengers died on the spot, while four others were declared dead by doctors at Sadar Hospital in Hazaribag. The fatality figures may go up as some are seriously injured. We are preparing to send them to Rajendra Institute of Medical Science (RIMS) in Ranchi, SP added.

Prime Minister Narendra Modi has expressed grief over the accident.

Taking to twitter, he wrote, ” Anguished by the loss of lives in the bus accident in Hazaribagh district, Jharkhand. In this tragic hour, my thoughts are with the bereaved families. Praying that the injured recover soon”

Anguished by the loss of lives in the bus accident in Hazaribagh district, Jharkhand. In this tragic hour, my thoughts are with the bereaved families. Praying that the injured recover soon: PM @narendramodi

However, Jharkhand Chief Minister Hemant Soren said, on Twitter, “I am saddened by the death of passengers due to the bus falling from the bridge in Tatijharia. May God give peace to the departed souls and give strength to the bereaved families to bear this sad time. Relief and rescue operations are being carried out by the district administration. I wish the injured a speedy recovery.”