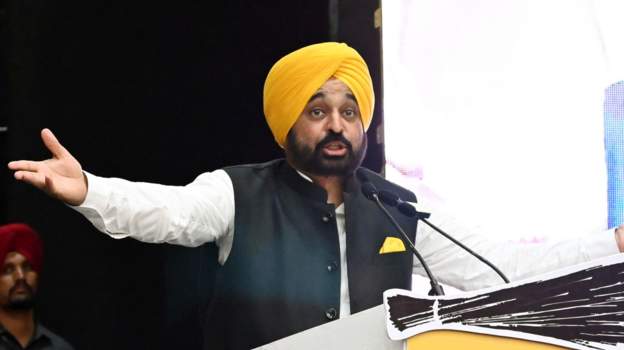 Chandigarh University: What did Mohali Police say in the objectionable video viral case?

Mohali: Punjab government has ordered an inquiry in the case of objectionable videos of girl students going viral at Chandigarh University. In this case, the Punjab Police has arrested a girl who has been accused of sharing the video.

Mohali SSP Vivek Soni claimed after preliminary investigation, police have found only one video of the accused herself and there is no other video of anyone else.

Punjab Chief Minister Bhagwant Mann said that high-level inquiry has been ordered in connection with the incident. Taking to Twitter, the CM said, “Sad to hear about the unfortunate incident at Chandigarh University…our daughters our respect…a high-level inquiry has been ordered into the incident…severe action will be taken against whoever is found guilty… I am in touch with the administration… I appeal to everyone to avoid rumours….”

1/2 It is really saddening to know about the unfortunate incident at Chandigarh University. Since this matter is very sensitive, it is my request not to forward any unsubstantiated news. There is no news of suicide by any girl student.

However, the police are denying the fact of attempt to commit suicide.

‘Only one student’s video was found’

According to news agency ANI, Mohali SSP Vivek Soni said, “This is a case of a girl recording a video and circulating it. The accused has been arrested after registering an FIR in this case. Someone died in this incident.” As per medical records, there was no suicide attempt and no one died. Due to nervousness and restlessness, one student was unwell who was taken in an ambulance. Our team is in touch with him.”

#WATCH | So far in our investigation, we have found out that there is only one video of the accused herself. She has not recorded any other video of anyone else. Electronic devices and mobile phones have been taken into custody and will be sent for forensic examination: Mohali SP pic.twitter.com/wv5dKYzYCr

He said, “Forensic evidence is being collected. In the investigation so far, we have found only one video of the accused girl. She did not record any video of anyone else. All the electronic devices and mobiles have been confiscated which have been taken for forensic examination. Apart from the video of only one student, no other video has come to our notice till now.

Punjab Education Minister said, “This unfortunate incident that happened in Chandigarh University is very sad. The matter is very sensitive so my appeal is not to spread false news. No student has committed suicide. I would like to thank the students of the University and especially the girls.” I assure you of justice. Let DC Mohali and SSP do a detailed inquiry into this matter. The guilty will not be spared.”

Punjab State Commission for Women Chairperson Manisha Gulati said, “This is a serious matter. The investigation is on. I assure the families of all the students that the accused will not be spared.”