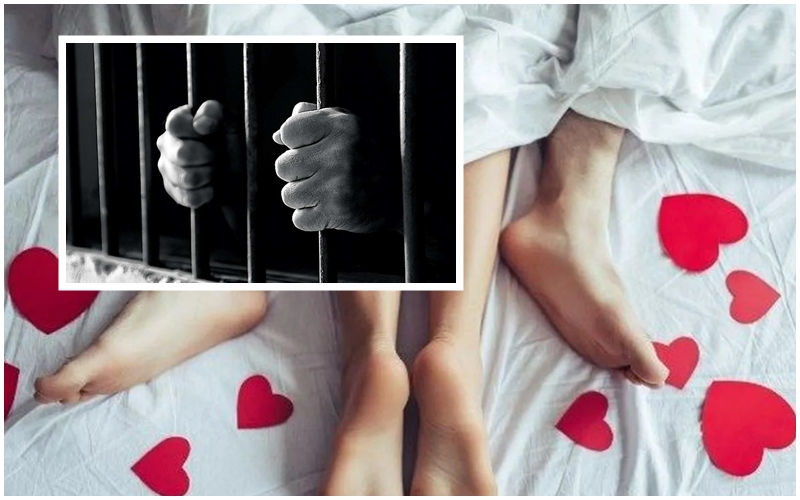 Punjab is the first state to provide facility to meet husband and wife in isolation inside the jail.

Earlier, prisoners were not allowed to have physical relations with their husband or wife.

The prisoner whose conduct is good will get this facility

This facility is available in many countries including America, Philippines, Canada, Saudi Arabia, Germany, and Australia.

CHANDIGARH: The bars of the jail will also become a witness to the increase of the dynasty. In jail, husband or wife will be able to meet their life partner in solitude. Now, prisoners allowed to have physical relations with their husband or wife. Do not be surprised, this initiative has been taken by the Punjab Government and the reason for this is several cases reached the Punjab and Haryana High Court this year.

First case in March 2022, a woman from Gurugram reached the Punjab and Haryana High Court. His petition was different from other cases. The woman had sought permission from the jailed husband to have a physical relationship. The woman argued that she wanted to carry on her lineage from her jailed husband. The woman said that her husband was convicted of murder and other offences by the Gurugram court. Since 2018, he is lodged in the Central Jail in Bhondsi district.

Second case, Earlier on January 2022, a petition was filed in the Punjab and Haryana High Court, in which the wife sought an appointment with her husband in a separate room. He referred to Article 21 of the Constitution, in which he has got this right.

Prisoner Gurjit Singh, the first to take this facility, said, “Jail is a jail. In any prison, the prisoner feels lonely there. Remains in depression. But last days when my wife came to meet me in jail and we were allowed to spend few hours in solitude here. It was a big relief for me.”

Gurjit, a resident of Gurdaspur, is grateful to the Punjab government for this facility. In fact, Punjab has become the first state to provide facility to meet husband and wife in solitude inside the jail.

Facility available in 4 jails of Punjab

After which the Punjab government took an important initiative. In the jail here, prisoners are being allowed to spend some time alone with their life partner. For this a separate room has been made in the jail. At present, this facility has been started in Indwal Sahib, Nabha, Ludhiana and Bathinda Women’s Jail. Preparations are on to start it in all jails.

This facility is not for gangsters and sex offenders.

But this facility is not for every criminal right now. Notorious criminals, gangsters and prisoners serving sentences in cases related to sexual offenses will not get this facility. The jail official said that for this the prisoner first gives an application to the jail administration.

After the application is approved, prisoners of good conduct are allowed to stay with their spouses for two hours. For this, the jail administration has prepared separate rooms, which will also have separate double beds, tables and attached bathrooms.

Before such a meeting, the Punjab government has also prepared a list of some rules. First of all there is a marriage certificate. For this, first you have to show the marriage certificate of being husband and wife. After this, the second largest certificate will be the medical certificate. In which there should be no HIV, sexually transmitted disease (STD), corona infection and any other such disease. After this, the jail administration will give two hours, on which the husband and wife will be able to spend time alone.

The senior official said that priority will be given to the prisoners who have been in the jail for a long time. The urge to meet a wife or family would compel the prisoners to change. The Jail Department hopes that with this initiative, family ties will be strengthened and the prisoners will also try to improve themselves. After this, prisons can actually turn into reform planets as well.

Prisoners did not have this facility earlier

In fact, in the year 2015, the High Court had heard the petition of the husband and wife, who were facing death sentence and life imprisonment in the case of ransom and then brutally killing a minor. After which the court had directed the government to constitute a Jail Reforms Committee to establish matrimonial relations and arrange family visits for the prisoners in the jail.

The Punjab government in its noting has cited the dictionary to explain the meaning of conjugal and said that married couples can have sex during their visit in jail.

Jail officials say the purpose of such visits is to strengthen family ties.

This will promote better conduct of the prisoners and will also save them from the negative effects of jail.

This increases the chances of rehabilitation of prisoners.

It was said in the government’s noting that such meetings are allowed in many countries.

These countries have special rules for such meetings. However, there is no such rule in India as of now.