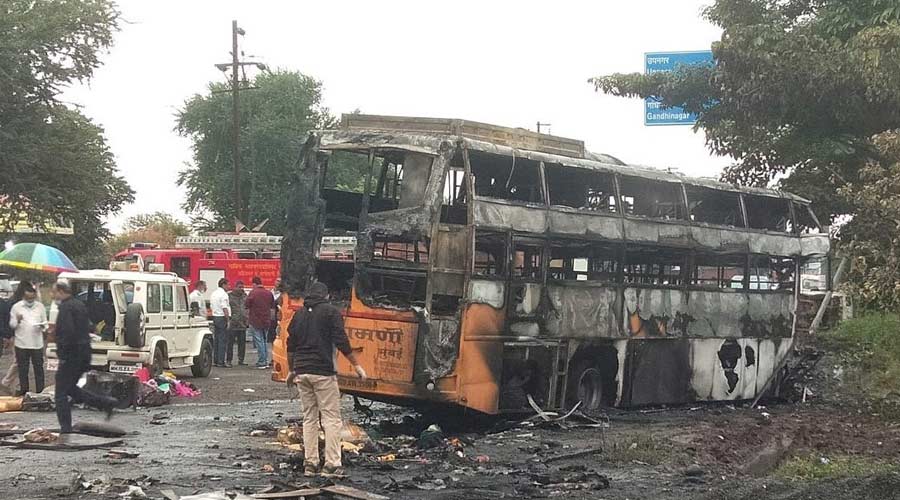 MUMBAI: 11 people were killed when a private bus caught fire in Maharashtra’s Nashik on Saturday morning. About 38 people are said to be injured in this accident.

According to the police, the accident took place at around 5.30 am near Nandurnaka on the Nashik-Aurangabad road. The bus going from Mumbai to Yavatmal collided with a container truck and the bus caught fire.

Nashik Deputy Superintendent of Police Amol Tambe said, “38 passengers sustained minor injuries in the accident. His treatment is going on. Those who died are being identified. The incident is being investigated as to how the accident happened and how the bus caught fire.

Prime Minister Narendra Modi has expressed regret over the incident and announced compensation.

The PMO wrote in a tweet, “Anguished by the bus tragedy in Nashik. My thoughts are with those who have lost their loved ones in this mishap. May the injured recover at the earliest. The local administration is providing all possible assistance to those affected”.

An ex-gratia of Rs. 2 lakh from PMNRF would be given to the next of kin of each of the deceased due to the bus fire in Nashik. The injured would be given Rs. 50,000: PM @narendramodi

Prime Minister Modi has announced Rs 2 lakh each to the next of kin of those who died in the incident and Rs 50,000 each to the injured.

Maharashtra Chief Minister Eknath Shinde also condoled the accident. He has announced Rs 5 lakh each to the next of kin of those who died in the accident. Along with this, it has also been announced to get the injured treated at government expense.