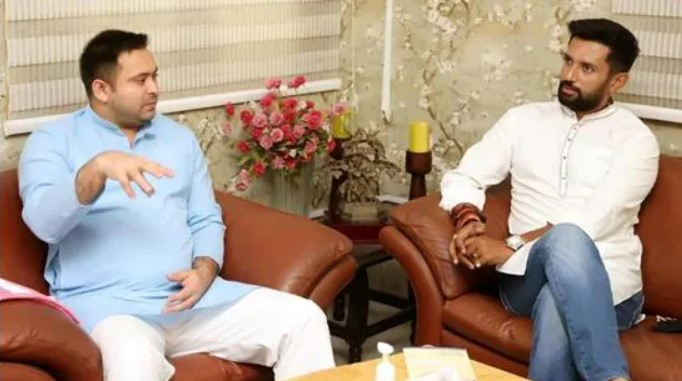 PATNA: After the formation of the new government in Bihar, the National President of LJP (Ram Vilas) Chirag Paswan has congratulated Tejashwi Yadav. Although he did not write any words for congratulatory Chief Minister Nitish Kumar, while Paswan swiped CM.

Chirag Paswan wrote about Tejashwi’s new ally i.e. JDU that he was disappointed with the development of Bihar.

Meanwhile, for the past few days, Chirag Paswan has been attacked on Chief Minister Nitish Kumar.

These days, during the political rhetoric and speculation going on in Bihar, Chirag Paswan has also been a constant attacker on Nitish Kumar through his social media handle.

Chirag had also said that President’s rule should be imposed in Bihar and asked Nitish Kumar the question “Do you have any ideology or not?”

Chirag also said, “In November 2020, when the results of the Bihar assembly elections were out, I had said that for Chief Minister Nitish Kumar ji, nothing is more than his personal ambitions. He knew even then that the Prime Minister in the NDA. There is no vacancy for the post. I had said then that very soon he would hit back again. He has ambitions to become a common candidate from the opposition side.

Is Nitish Kumar’s overturning happening for the development of Bihar?” JDU will get zero seats in the next election, he added.