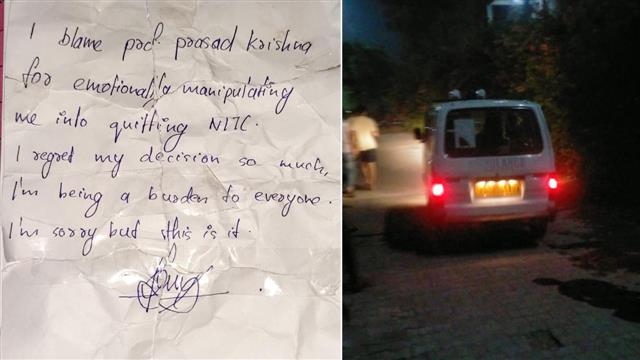 JALANDHAR: Days after an agitation over leaked videos at a private university in Punjab’s Mohali, students at Lovely Professional University (LPU) near Jalandhar held a massive protest Tuesday afternoon on the campus after a first-year student committed suicide in the university hostel. A suicide note was also found from the room of Dilip Kumar, son of Ejin S Dilip Kumar, a student from Kerala.

According to the police, the matter was brought to the notice of the Civil and Police Administration by LPU authorities on Tuesday evening. Following the incident, some students held protests at the campus and heavy police were deployed, they added.

Civil and Police Administration officers reached the spot and carried out the preliminary investigation.

The police also used lathi-charges late at night to disperse the students who were creating ruckus in the university. The police had been celebrating for a long time earlier. But when the students came out on a ruckus, the police used mild force to remove them. Some students have also suffered injuries in lathi-charge.

Phagwara Deputy Superintendent of Police (DSP) Jaspreet Singh said the police recovered a suicide note in which the student, 21, had mentioned some personal reason for taking the extreme step. “We are investigating the matter further,” he added.

Superintendent of Police Phagwara Mukhtiar Singh said that now the situation is under control at LPU.

Police and administration officials tried to persuade the students, but their efforts were unsuccessful. The police wanted to put the student’s body in an ambulance and take it to the Civil Hospital Phagwara for post-mortem, but the students blocked the way for the ambulance. The police was not even allowed to take the body out of the university. After a lot of effort, the ambulance was pulled out through another route. The body has been kept at the Civil Hospital in Phagwara.

Jalandhar, Punjab | Students gathered in large numbers last night inside the Lovely Professional University campus to protest over the suicide of a first-year student

The initial probe has now unfurled the reasons, as mentioned in the suicide note, to be personal issues. https://t.co/Twjt5OqX4o pic.twitter.com/equATAIbPj

Police officials were asking the students to get their statements recorded. Whoever is guilty, will take legal action against him, but the students were not agreeing. The students were saying that those whose names have been written in the suicide note, those who have been considered guilty of suicide, should be arrested. Only then will he stop the show. Let us tell you that Dilip Kumar was a student of Bachelor of Designing first year. He committed suicide in the hostel room on Tuesday night itself.

The parents of the student have been informed, who are reaching the university.

LPU in said a statement the varsity fraternity is “saddened by the unfortunate incident”. “Initial investigation by the police and the contents of the suicide note point towards personal issues of the deceased. The University is providing full support to the authorities for further investigation. The University mourns the loss of the student and expresses its condolences to the bereaved family,” the statement posted on LPU’s official Twitter handle read.

Aam Aadmi Party (AAP) Rajya Sabha member Ashok Mittal is the Chancellor of the University, which is the largest varsity area-wise.