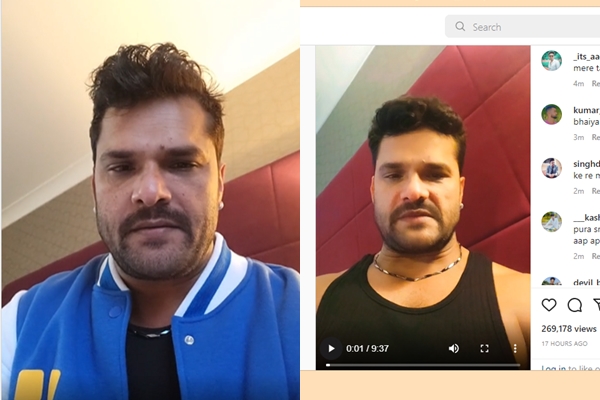 Khesari says that he is being harassed so much that he is thinking of leaving the Bhojpuri industry.

PATNA: Khesari Lal Yadav has again looked embroiled in controversies in his live videos. He said on live that his daughter is being targeted in Bhojpuri songs. Yadav was crying on Instagram live video at late night of 29th November. He said, some people are targeting his daughter. By editing their photographs, obscene songs are being made on them. And all this is being done with the aim of troubling Khesari. Khesari also said that if this continues, he will leave the Bhojpuri industry.

Khesari said in his Instagram live video that one of his acquaintances (friend/relative) had slapped a boy in the live video. That boy was Rajupat. The entire Rajput society was infuriated by this. To avenge this, those people were looking for Khesari with weapons. Apart from this, they edited their daughter’s photo and used it in the Fuhad music video.

Khesari said that he is very worried about this matter. He is not able to sleep because his family is being targeted. His desire to eat and drink has almost ended. Because he is an artist as well as a father. If there is talk about his daughter, he too will not remain silent.

In about 13 minutes long live video, he also said that some conspiracy is happening against him. 200 of his songs were deleted from YouTube. Basically they say that they are being stopped from working. Khesari says-

“I have never been so sad as before today. I am in a lot of pain. My daughter is being insulted because of me. I can’t even make eye contact with my daughter. I am not able to talk to him on the phone. What shall I tell her that she is being insulted because of her father! Follow my work but it is not right to drag the family. It is not right to make obscene songs on someone’s daughter’s photo and name.

“I have been barred from working. who are these people? Where have you come from? I don’t know. My family is being targeted. I am also a father. I also have a family. Bhojpuri society is also my family. I am active for the family. As honest as I am for my family, I am equally honest for the public. I am unable to give time to my family to entertain the public.

During the engagement of popular tennis players Sania Mirza and Shoaib Malik, Khesari Lal Yadav composed a song on the couple. Sania had filed a defamation case against him regarding this song. Because of this Khesari had to spend about three days in jail.

Kajal Raghavani made a big allegation over Yadav

There was a time when Khesari Lal Yadav and Kajal Raghavani’s love was discussed in the Bhojpuri industry. But suddenly the distance between the two stars increased. After this, the actress accused Khesari Lal Yadav of cheating and defaming her.