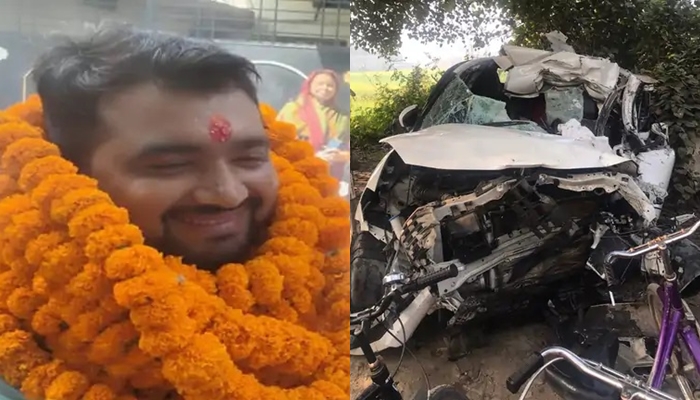 He was going to Gorakhpur by car with a friend, when suddenly the vehicle hit the truck on the highway

MOTIHARI: Ward councillor from Ward no 35 of Motihari Municipal Corporation, Avinash Kumar Jha alias Bittu (35 years) was killed in a road accident. According to information, Bittu was going to Gorakhpur with his friend for some work. A terrible accident happened due to a sudden speeding truck.

However, the condition of the accompanying friend remains critical. The relatives have reached UP to bring Bittu’s dead body to their home in Motihari.

Actually, ward councilor Avinash Jha was going to Gorakhpur with his friend Monu Pandey in his car. Monu was driving the car. Meanwhile, near Fazil Ganj, he got hit by a car, due to which he was seriously injured. He was rushed to the hospital in a hurry. While the doctor declared him brought dead, Monu’s condition still remains critical.

Avinash was married to Preeti in April 2022. Not even a year had passed since the marriage that the husband died in a road accident. After the accident, the family members are in bad condition by crying.

Avinash had become the ward councilor from Ward 35 in the municipal elections held this time. Local people say that he had won the election on the basis of his efficient behavior. Avinash was always ready to serve the people of his ward. After the accident, well wishers are also in bad condition by crying.