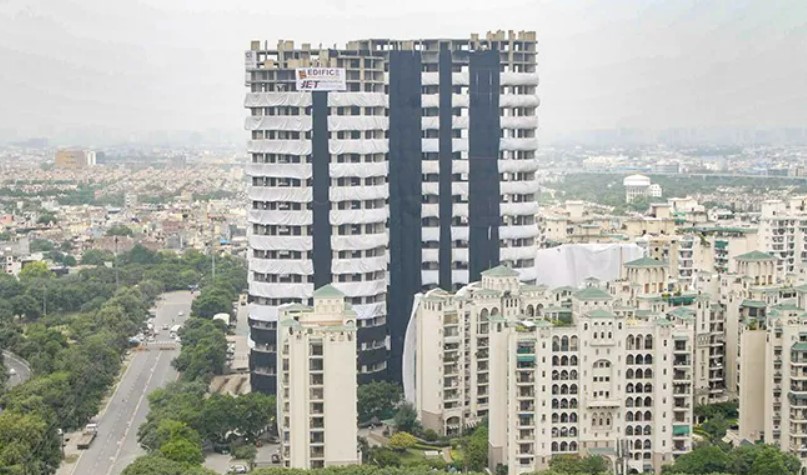 NEW DELHI: After much anticipation and a nine-year-long legal battle, the Supertech twin towers of Noida will be reduced to rubble on Sunday (August 28). The towers, Ceyane (29 floors) and Apex (32 floors), that are part of the Emerald Court project of Supertech Ltd, were found to be in violation of multiple regulations regarding construction, and are therefore being demolished.

The final inspection of the explosives and related arrangements for the demolition of the illegal Twin Towers of Supertech in Noida was done on Saturday.  Project officials gave this information. Officials said that all the work of installing and connecting the explosives has already been completed. He said that only the work of connecting the twin towers and laying 100 meters long cable wire from the structures to the ‘exploder’ (detonation device) is left. He told that these buildings will be demolished on Sunday.

More than 37,00 kg of explosives will be used to demolish these buildings 100 meters taller than Qutub Minar in Delhi. The Supreme Court had termed this construction in the middle of the Emerald Court Society complex as a violation of rules, after which work is being done to demolish them.

More than 5,000 residents of the twin tower’s two nearest societies – Emerald Court and ATS Green Village – and their 150 to 200 pets will be evacuated by 7 am on Sunday.

According to the police, Emerald Court has 15 towers and ATS village has around 25 towers and four villas. About three thousand vehicles will also be removed from both the premises.

On Sunday the button to blast the twin tower will be pressed at 2:30 pm

Mayur Mehta, Project Manager, Edphis Engineering, said to media, “After this happens and all the teams have come down from the buildings, the two buildings Apex and Cyan will have to be interconnected. After this, a 100 meter long cable wire will be laid from the tower to the detonator so that the buildings can be demolished. We will press the button at 2.30 pm.” Asked how confident he is about the safe demolition of the building, Mehta said, “100 percent. I have no words other than this. We have 100% confidence.”

The technique was used for the first time in 1773 to raze the Holy Trinity Cathedral in Waterford, Ireland, with 68.04 kg of explosives. It was recently used in India in the 2020 demolition of four luxury waterfront apartments in front of Vembanad Lake in Kochi’s Maradu for violating Coastal Regulation Zone regulations. The same technique can be used for the demolitions of bridges, smokestacks, towers, tunnels, and other structures, too.

People taking pics of Twin Towers at secto-93 in Noida

Comment (1) on “Twin Towers Demolition: Around 3700 kg of ammo laid, button to pressed on Sunday at 2:30 pm to blast twin tower, grounded in 15 seconds”